On March 26, Apple unveiled the 2020 version of its iPad Pro,the professional version of its range of tablets.Even if even today,the 2018 version runs without a problem,this new version offers a new photo block and a refreshed processor.What is the iPad Pro 2020 worth,are the changes significant? It’s time for the full test. 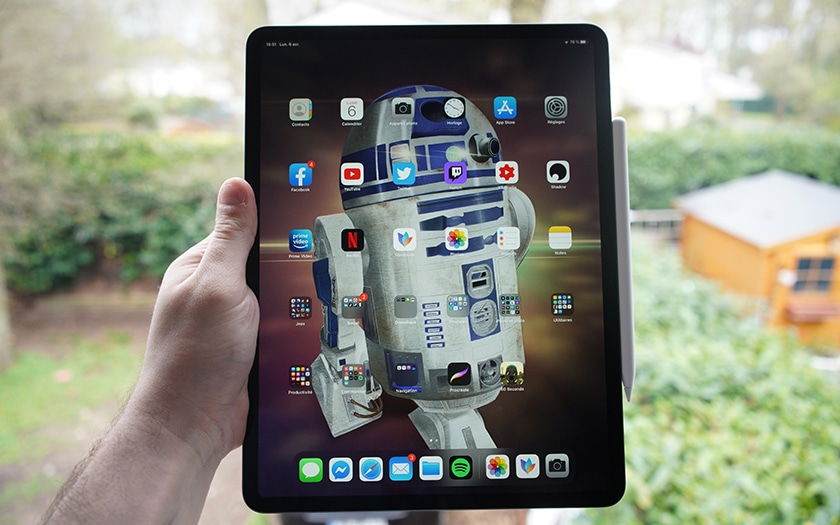 The iPad Pro of 2020 seems to be mistaken for its predecessor of 2018.For the product is still available in two versions,one of 11 inches,the other of 12.9 inches, the size and design remain the same.

The general appearance of the iPad Pro is very attractive.Available in two colors, space gray and silver,we find the codes of the iPhone 5/5S with the aluminum outline and sharp edges that have not aged and remain very pretty.

The iPad has a remarkable finish as La Pomme has always been able to offer.The 12.9 ″ version we had in our hands measures 28 cm high by 21.4 cm wide but turns out to be really thin.It is only 5.9mm thick when the iPhone 11 pro max is 8.1.

On the front, Apple offers a Liquid Retina IPS LCD screen with a refresh rate of 120Hz, full coverage of the DCI-P3 spectrum, and luminance of 600nits.The only difference between the two versions is the screen resolution.The 11 ″ version offers a resolution of 2388 * 1668 Pixels and the 12.9 ″ version a resolution of 2732 x 2048 pixels,both 264pixels per inch.

No OLED, therefore, nor Micro-LED, we remain on a technology that Apple masters and this is ultimately its strong point. This screen is calibrated, and the rendering is sublime. It had already made the success of the 2018 version of the iPad Pro and is still as pleasant to use. Hidden in the upper border, we can find the Face ID facial recognition system that will allow unlocking and authentication quickly and efficiently 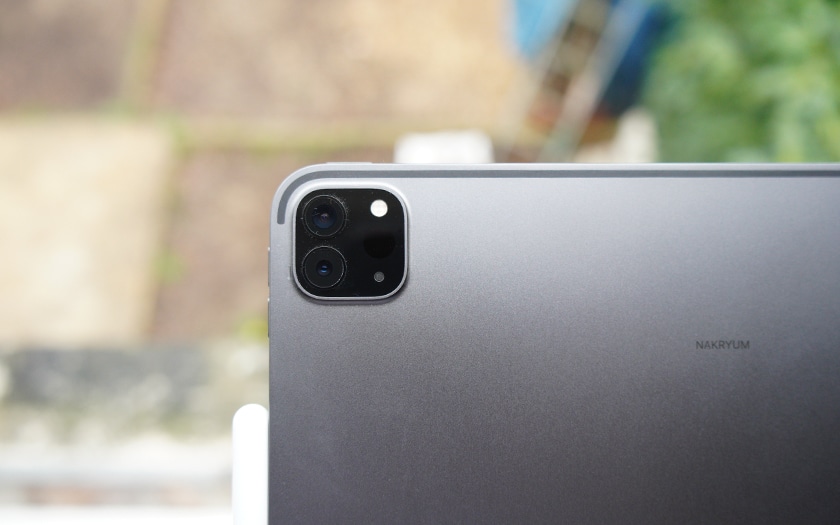 Sound level,no complaints:the 4 speakers provide rich sound, the bass is present and the whole is well balanced.We can almost do without a Bluetooth speaker as the sound is pleasant directly from the iPad pro.It is also equipped with 3 “studio quality” microphones which prove convincing,however,it is not a professional microphone either.

On test, the sound comes out clear,balanced,and precise,but can perceive a slight breath in “background”.Small point privacy, when using a protective shell certified by Apple,the magnet locking also allows physically disconnect the microphones.It is therefore impossible to listen to you when the iPad is closed. 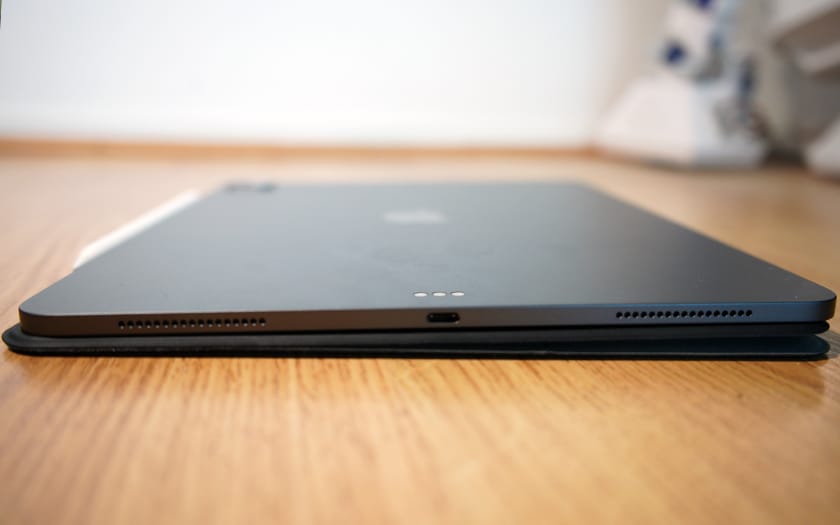 Inside the iPad Pro,we have the right to an improved version of the previous processor,the A12Z Bionic succeeds the A12X, still in 64-bit architecture. It is assisted by 6 GB of RAM and offers great performances.

However,the difference with the previous version is on a daily basis not really obvious. 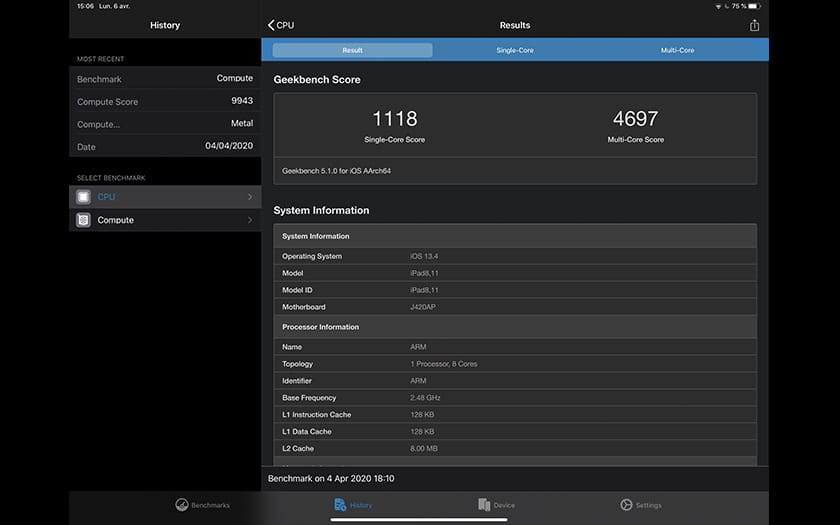 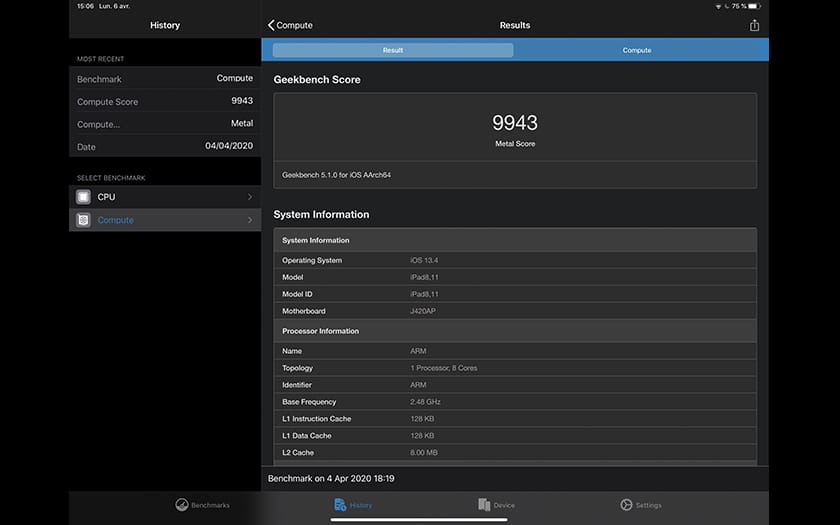 As for the video,we were able to mount rushes in 4K 30FPs without slowing down and without flinching. Great performance in such a compact format.The Luma Fusion application offers a complete solution that could harm the iPad,but it defends itself without worries. The previews are fast,the fluidity remains at the rendezvous and the export is even faster than on our usual desktop computer.

The small negative point,since there must be,the battery.Announced for an autonomy of 10 hours,it hardly holds in time when asked a lot.On an 8h drawing session,and using YouTube multitasking to watch videos while we were drawing,we had to fully charge the iPad once to keep it going. Little regret when you know that it takes 3 hours for a full charge and that the adapter provided only offers a charge of 18 W.However when we devote ourselves to less greedy uses,autonomy can easily reach 12 noon,which is quite sufficient for a good working day.

For some time now,iPads have had their own OS,IpadOS,which clearly makes the difference. Implementation of multitasking on a single screen, the possibility of a floating window,improved file management,and support for external devices (keyboards/mice and storage for example… We are in the perfect in-between iOS and macOS. If certain tasks remain delicate in touch (precise selection of text, copy/paste with 3-finger gestures),these can now be performed with the mouse thanks to the latest version of the OS which includes a pointer.The iPad Pro,therefore,adapts to the way you work for easier use.Apple Pencil for drawing,keyboard/mouse for office automation,it becomes really easy to consider it as a tool that can replace the computer.

In order to test this iPad,we started off by spending a full day on the Procreate drawing application using the Apple Pencil 2.The screen is a joy to use,the styling too,and the Procreate application is positioned as a “must-have”. IPad Pro becomes a complete tool for illustrators and graphic designers.And this is really the strong point of this product.The iPad Pro 2020 allows you to awaken your creativity.A small point to note:once magnetized on the iPad, the Pencil fits without any concern on the edge of the device.

The iPad Pro also allows you to browse the internet, watch videos, and listen to music,and it does it really well. Safari on IpadOs allows navigation on the desktop versions of websites,it is very fast and easy to use. Classic VOD applications are available,and watching YouTube or Netflix on the 12.9 ″ screens is a joy.The display surface is comfortable and does not tire the eyes. 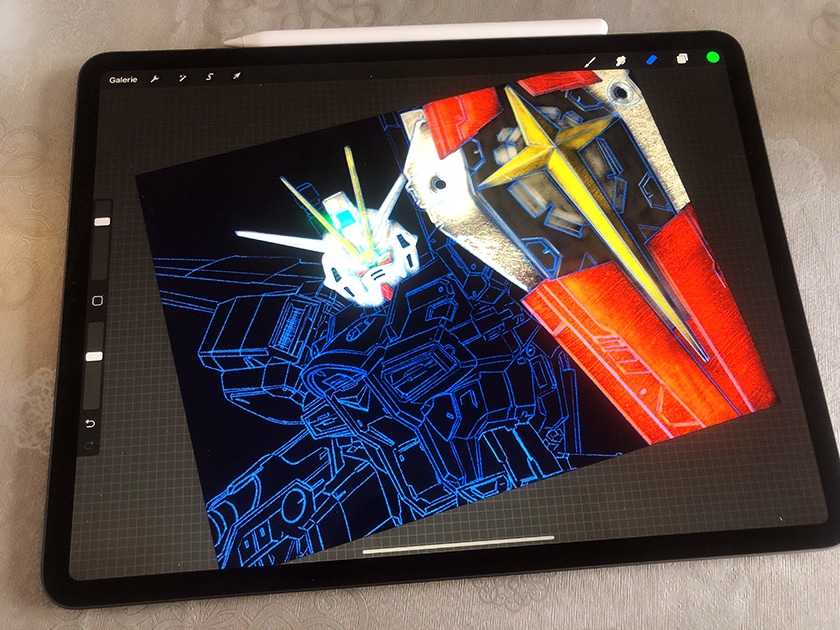 In terms of video games, tablet only,if you want to play a game requiring a little precision (PUBG,FORTNITE,COD MOBILE),it’s hell.The iPad accuses the blow of its weight.Controlling your character with virtual joysticks is complicated,as the tablet tends to want to fall back. Using a console controller (Xbox or PS4) will greatly simplify the task and ease of use.

If the front remains the same,it is at the rear that we can see the most differences. Aside from the entire aluminum back,the product has a new photo module offering three sensors,taking the shape of that of the iPhone 11 Pro.The first wide-angle sensor of 12MP equivalent 26mm opening at f / 1.8, the second,an ultra-wide angle of 10MP equivalent to an 11mm lens opening it at f / 2.4 and finally, the big news,a TOF sensor using the LiDar point cloud scanner technology already present on certain autonomous cars.This technology borrowed from the automobile makes it possible to calculate the depth of field by projecting a  laser point cloud and calculates the time to return to the objective to model the environment. A goal that shows Apple’s desire to encourage users to familiarize themselves with augmented reality.In order to assist developers,Apple has also released new AR APIs included in the new version of iPad OS. 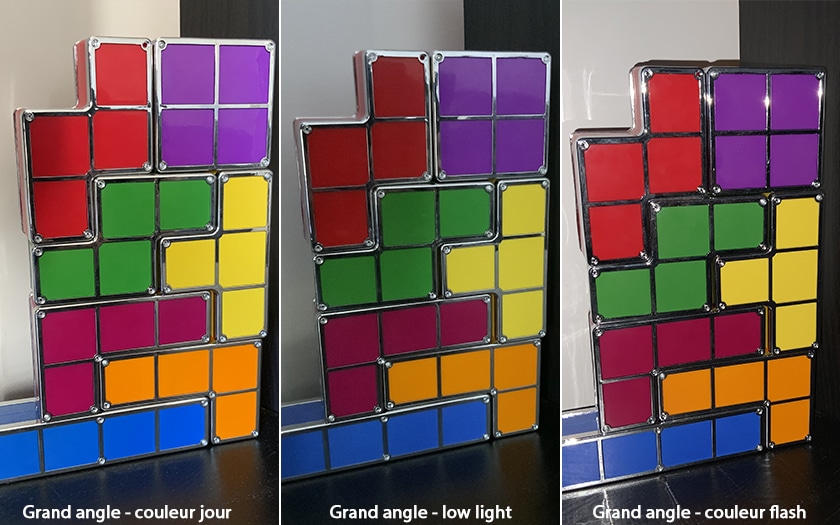 Overall,these sensors are doing well,but just fine.The photos in low light or in dark shades are often filled with grain and cruelly lack sharpness,the use of the flash still allows to recover a little information, but the rendering is very questionable.The ultra-wide-angle in low light offers a total artistic blur,we lose all information.

The whole remains however defined and readable even if the wide-angle of 12MP is doing really better than the ultra-wide angle of 10MP.However,the tablet remains heavy and less practical than a smartphone for taking photos. The application could have been revised to integrate the shooting buttons,settings in places easier to access than the middle of the screen.

The most interesting side remains this new LiDar sensor which allows a really clean result.An object tracked at a specific location does not move and remains a very stable space. It’s impressive.The Ikea application allows you to realize this.

The iPad Pro is an entertainment tool,but above all,Professional, which requires a quick tour of its office automation capabilities.Once the touch keyboard is understood (Apple keyboards are not exactly like Windows keyboards),the experience is pleasant.All the biggest office applications are present in the App Store.Pages or Word, Numbers, or Excel, you can quickly find your habits and work without worries. Processing text becomes a child’s play.A small point to note however, the file management application lacks simple functions like “open with …” or “create a shortcut”.If you want to open a downloaded text document, for example, you will need to navigate from the word processing application to get the file from your iPad.Another point to note,Pages, Apple’s Word,unfortunately, does not read all types of text files. We were unable to open.ODT (OpenOffice) files on it.

Finally,Apple announced at the same time as the iPad Pro 2020,the Magic Keyboard.

This accessory available for pre-order on the site and in physics from May (and sold dearly,$ 349 for the 11 ″ version, $ 399 for the 12.9 ″ version) will protect your Ipad but will give it more of a trackpad and keyboard. Making the experience even closer to what you can have on a Microsoft Surface Pro for example,while keeping the essence and simplicity of iPad OS,the Apple operating system launched in September 2019.An expensive solution,but all-in-one.
An additional advantage,the Magic Keyboard will allow multiple orientations and make the iPad Pro “float” a little higher in order to get closer to the comfort of use closer to the Laptop.To see when it comes out.

To take advantage of the device,you will have to put the price: the 11 ″ WiFi version is available from $ 899,while there is a starting price of $ 1,119 for the 12.9 ″ WiFi version.Note that both editions are compatible with the WiFi 6 standard.Count 100 € more for versions including support for the cellular network. On the other hand,the entry-level this year offers at least 128 GB against 64 GB in 2018,a good point when we see the weight of our applications also increases. 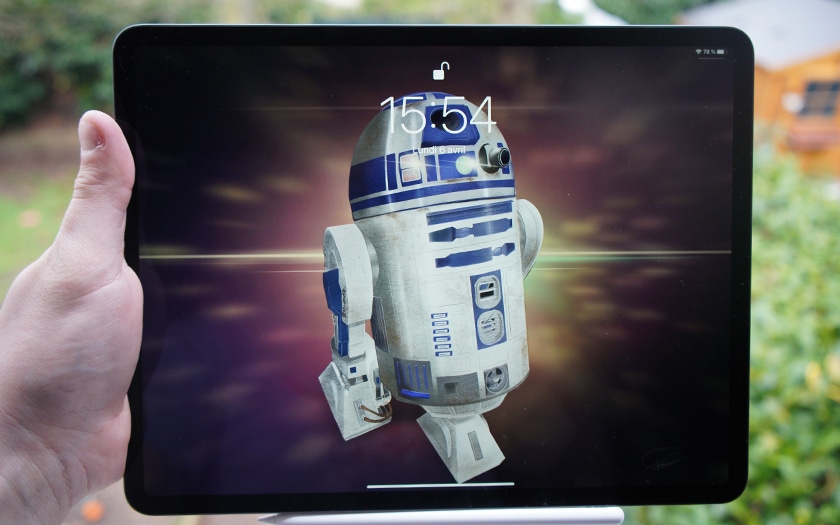 To conclude on the iPad Pro version 2020,it is a really powerful tool.If the battery and its photosensors are not the most convincing,it performs all the tasks that are asked without blinking.Watch Netflix or YouTube and browse the internet at the same time,draw in pencil or take notes with a keyboard and mouse,play games thanks to the support of Xbox and PS4 controllers, this iPad is offered as a practical and effective solution to halfway between laptop and tablet,iPad OS is efficient, and the hardware follows.We feel however the deliberate choice of Apple to orient this product for the creative.If you already have an iPad Pro in 2018 version, no reason to fall for the new one which basically does not offer big news.If you don’t have an iPad Pro and want to acquire one, it could offer itself as a convincing gateway into the Apple ecosystem.

This 2020 version of the iPad Pro is only an evolution of its predecessor,but an evolution of quality.All the interesting points of the previous version have been kept and this is not to displease us.the integration of the new triple photo module is questionable.The LiDar sensor is interesting and allows much better management of augmented reality.But in absolute terms,using a tablet to take pictures on a daily basis is not really practical.On the hardware side,the A12Z Bionic processor offers improved performance compared to the A12X,but the performance gain visible on the benchmarks is felt very little,if at all, in use. If you plan to use it for simple tasks,the 2018 version is more than enough.We regret, however, that the battery is not more substantial. Overall,it has nothing to envy to a laptop, but when asked a lot,it quickly falls below 6 hours of autonomy for 10 hours announced.

To work, the iPad Pro presents itself as a functional and comfortable alternative to the traditional laptop and has absolutely nothing to envy,even if some simple functions are missing or a little complicated to perform.However,those who will find their account the most are the creatives,designers,and graphic artists who will be able to exploit the touchpad to the maximum once coupled with the Apple Pencil.

Entertainment on this tablet is a real pleasure, watching videos or playing games is no problem and everything is fluid.However,for more demanding players, the purchase of a controller or a keyboard/mouse is inevitable in order to gain precision.