Getting started with the Samsung Galaxy Note 20: does plastic tick?

The Samsung Galaxy Note 20 was formalized at the same time as its big brother, the Ultra model, more visible because better equipped. The version that interests us here does indeed make some concessions and notably has a plastic back. We were able to take it in hand to give you our first impressions. 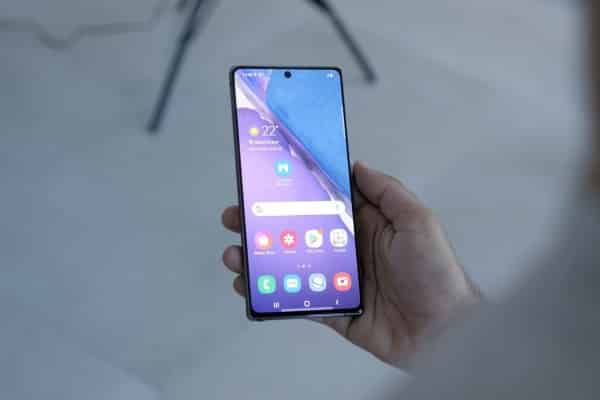 “Life in plastic, it’s fantastic,” Aqua sang in 1997 in the cult hit Barbie Girl. This heady slogan could almost be taken up by Samsung to extol the merits of its newly announced Galaxy Note 20. The new smartphone, despite its high-end positioning, indeed has a plastic back when we traditionally expect a “more noble” glass coating on such devices.

The Galaxy Note 20 does indeed make some concessions compared to the Galaxy Note 20 Ultra to appear at a lower price, but this one is arguably the most striking. Here is our grip to give you some impressions of the product.

A Glass-Effect Plastic That Questions :

The Samsung Galaxy Note 20 is smaller than its big brother Ultra, but it’s still quite large in the hand. Do not imagine holding there the small version of this series which actually comes in two models: large and extra large. The feeling in the palm is not unpleasant in itself, but obviously we need to take stock of the choice of plastic here.

The Galaxy Note 20 itself benefits from a really neat design. Yes, it has a Gorilla Glass 5 flat screen and the bubble housing the front photo sensor is thicker than on the Galaxy Note 20 Ultra. 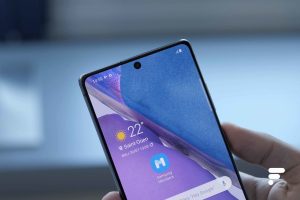 Also, in all fairness, the plastic back isn’t bad. This famous “glasstic” tries to reproduce a glass effect with more or less success. However, things get tough when you start to compare.

Indeed, the glass effect of the Galaxy Note 20 cannot reproduce the touch provided by the Galaxy Note 20 Ultra. If you hold both devices in your hands, you can feel it right away. However, most consumers are probably not going to lend themselves to this exercise and some will therefore be content with this less noble back. The big question at this stage is mainly to determine if it is really reasonable to put around 1000 dollars in a smartphone with a plastic back …

Beyond that, the classic Galaxy Note 20 has the advantage of having a rear photo module that does not protrude too much in relief. The glass rectangle at the top left clearly doesn’t go unnoticed, but it doesn’t interfere with the use of the device lying flat on a table. 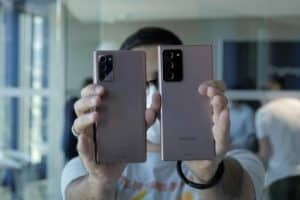 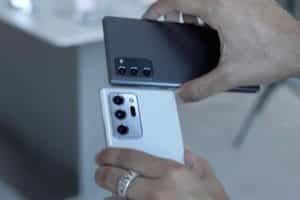 The USB-C port and IP68 certification for waterproofing are there, but not the jack. Note that there is no microSD drawer either.

The other big concession of theNote 20 is to be satisfied with a very classic 60 Hz screen while the Ultra version is equipped with an adaptive 120 Hz mode. Admittedly, the note 20 is a more affordable version, but it remains expensive and this sacrifice could be poorly received by users. An intermediate 90Hz option would have been welcome to provide a fairly smooth experience. 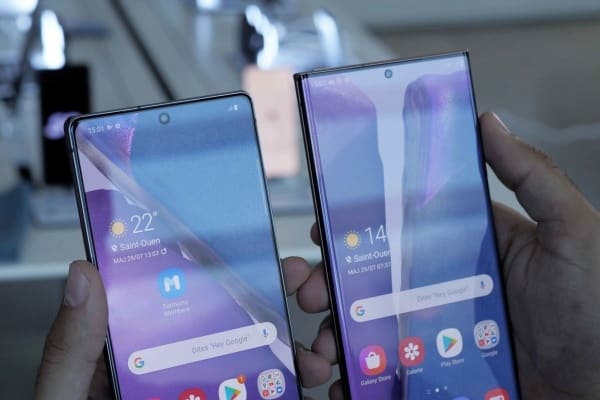 These criticisms aside, here we will enjoy a 6.7-inch AMOLED screen with still Samsung’s know-how in the field. Thus, your eyes will always be well pampered. But still, the frustration does not go away completely.

Still A Lot Of Qualities :

We have covered the main points on which the Galaxy Note 20 suffers in comparison with its big brother. For the remainder of the experience offered, the phone meets a high standard. The software innovations remain the same as on the more premium model with improvements to the S Pen and a partnership with Microsoft and Xbox highlighted. We invite you to read our Getting Started with the Galaxy Note 20 Ultra to learn more about it. 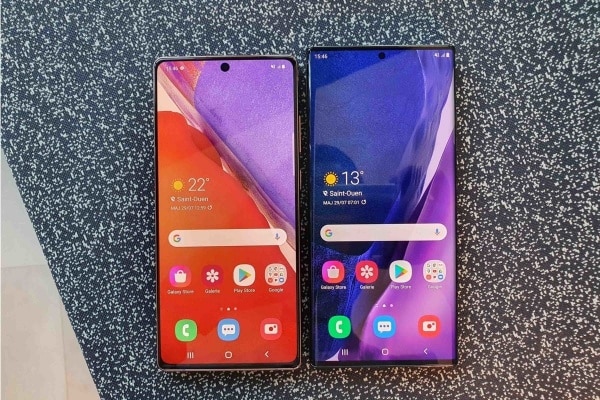 On the photo side, the Galaxy Note 20 takes the somewhat complex recipe of the Galaxy S20 with a main sensor of 12 megapixels (f/1.8), a 64 megapixel sensor (f/2.0) allowing you to take more detailed photos , zoom digitally (lossless x3 according to Samsung, maximum magnification x30) and shoot in 8K, as well as a 12-megapixel ultra-wide angle (f/2.2). No big news at this level. On the front, there is a 10 megapixel selfie sensor (f/2.2).

The Galaxy Note 20 is powered by the same Exynos 990 with 8 GB of RAM here and it comes with 256 GB of storage. In terms of power, we should not observe any difference with the Ultra version or the S20. For the battery, there is a capacity of 4300 mAh and a 25 W fast charger. Wireless charging and reverse wireless charging are there.

The classic Samsung Note 20 exists in a 4G version, but also in 5G. 100 dollars separate them and it will therefore be up to you to see which one best meets your needs and expectations.
Samsung Galaxy Note 20 Price And Availability :

You will be able to buy the Samsung Note 20 from August 21. You will have to pay 999 dollars to enjoy a 5G version. Three colors are available: gray, green and bronze.

If you want to pre-order, you can choose to receive a Moga controller designed with Xbox and a 3-month Game Pass Ultimate subscription or Galaxy Buds + wireless headphones (for Galaxy Buds Live on the Ultra version). Pre-orders last until August 20 at midnight.

LET US KNOW WHAT DO YOU THINK ABOUT THIS INFORMATION

Getting started with the Samsung Galaxy Note 20 Ultra: please without surprising