Everyone knows that the supply of tablets is much less than it was a few years ago. The excellence of the iPad in this area and the arrival of large smartphones have dampened the enthusiasm of manufacturers.

Still, there are still fierce brands trying to shake Apple off its throne. The Huawei MatePad Pro is the perfect example. We tested this premium tablet for two weeks. 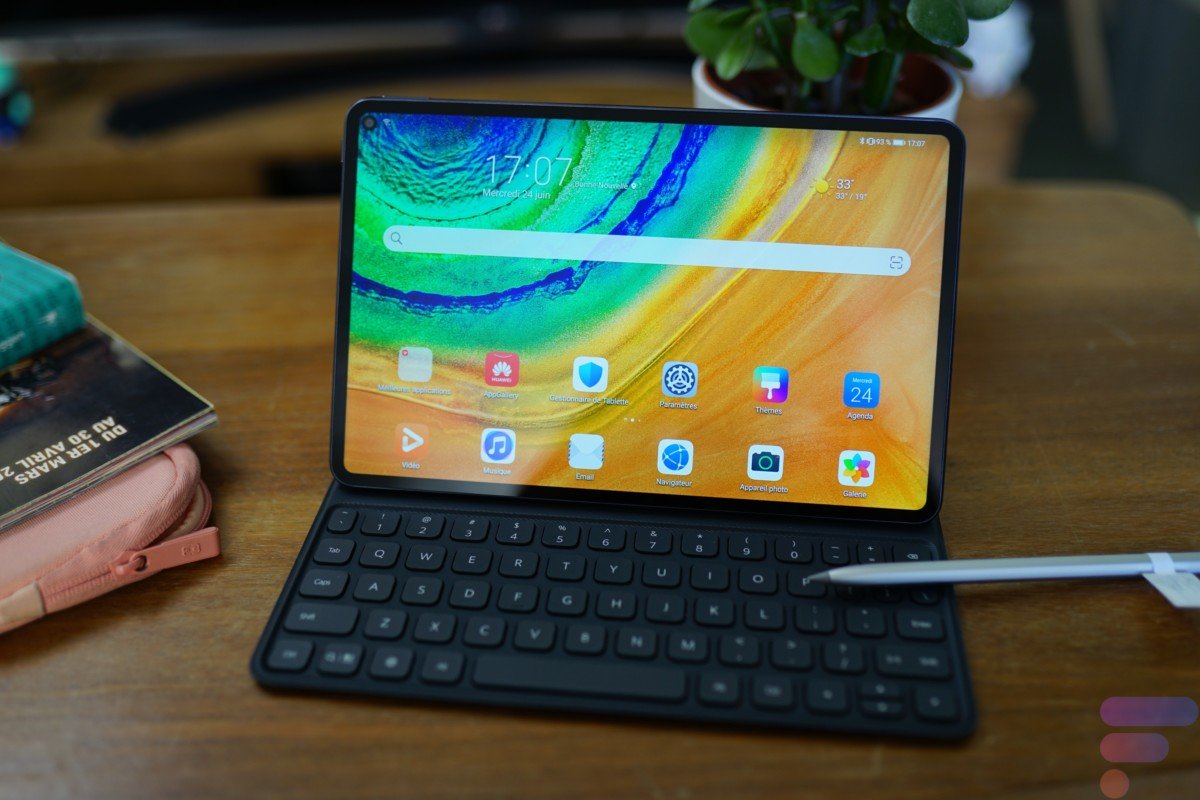 The Android tablet market continues to exist mainly through three brands: Amazon, Samsung, and Huawei. Among the alternatives, there is only the iPad. It’s true, there are models in Windows 10 like the Surface Go 2 and in Chrome OS, the Lenovo IdeaPad Duet for example, but these are alternatives not yet established.

On the Android side, we have three brands, two of which do not use Google services. Amazon has its own ecosystem with Fire OS (based on Android) and Huawei can no longer use Google services. It’s a sad fact. And yet there is still hope. Huawei unveiled an alternative to the iPad Pro earlier this year, albeit without Google, but equipped with Android. It is a premium product in the touchpad market.

Features Of The HUAWEI MATEPAD Pro :

The first thing you will probably notice on the MatePad Pro is its appearance: the Huawei tablet is light and elegant, sporting a magnesium alloy frame with matte finishes with micro-curved edges. The MatePad Pro is therefore a touchpad that is aesthetically successful: design, dimensions, weight distribution, etc. The screen borders are fine, but the tablet is still pleasant to hold in hand. 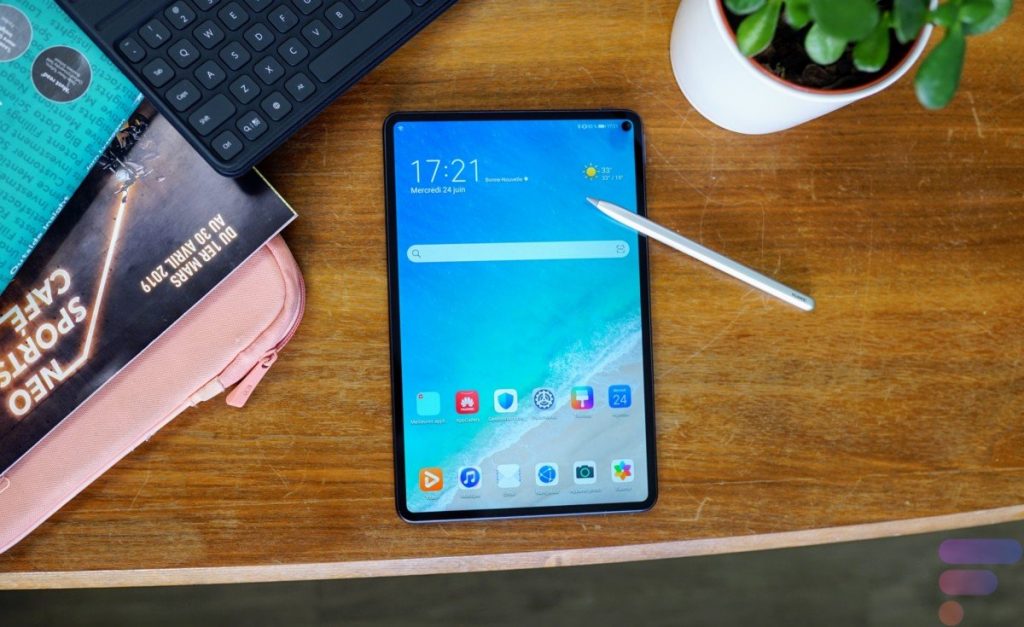 At the ends you will find four (two on each side) Harman Kardon speakers. The sound is powerful and the sound is balanced and precise. In terms of connectivity, the MatePad Pro supports Wi-Fi 802.11 ac (Wi-Fi 5) with Bluetooth 5.1 and a USB-C 3.1 port. 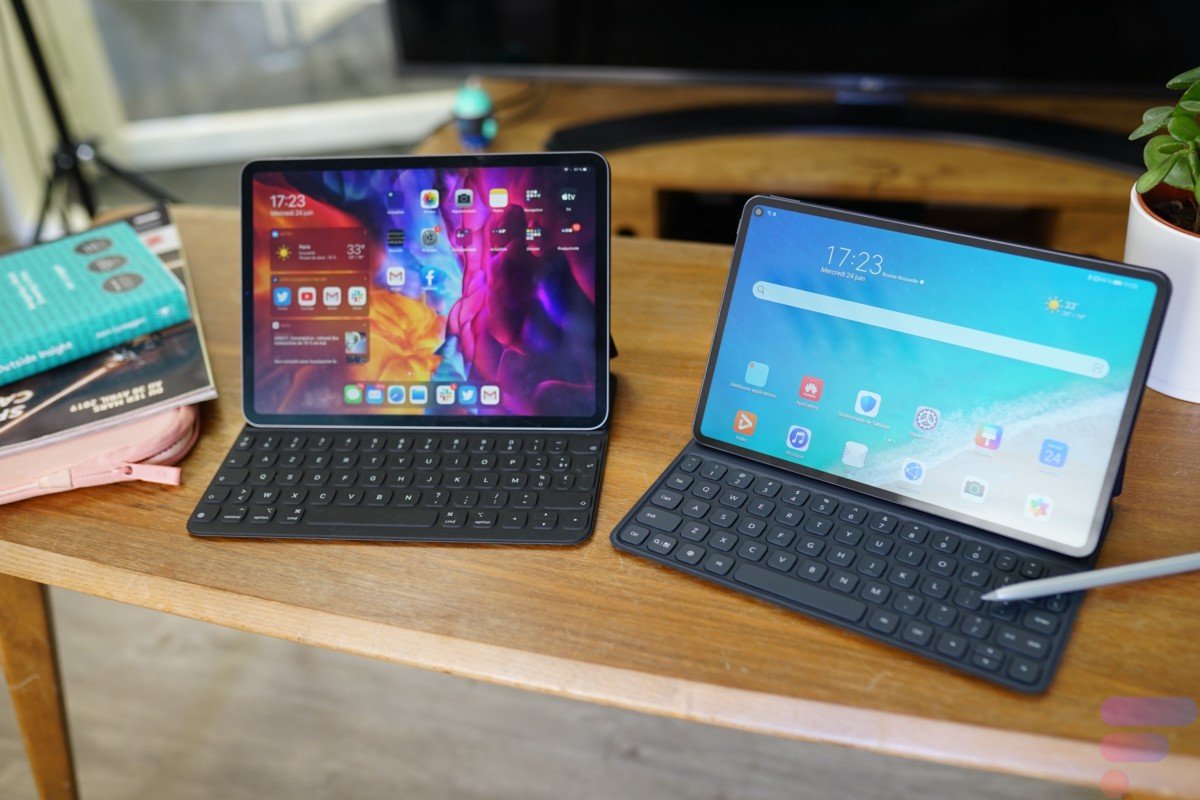 It is very similar visually to the iPad Pro, except for the 10.8-inch screen hole for the front camera. This hole allows Huawei to have a screen that covers 90% of the front surface.

Huawei has really taken care of everything, including the accessories: it supports the M-Pencil Bluetooth-compatible stylus and we find the keyboard in the form of a case. This keyboard protects the front and back of the tablet and is a full QWERTY keyboard (QWERTY on the test model) with a typing stroke of 1.3 mm. This keyboard is wider than that of the iPad because the screen is in 16: 9 display format. It’s not particularly comfortable to make it your main productivity machine, but it’s a nice keyboard for taking notes during meetings or outdoors. 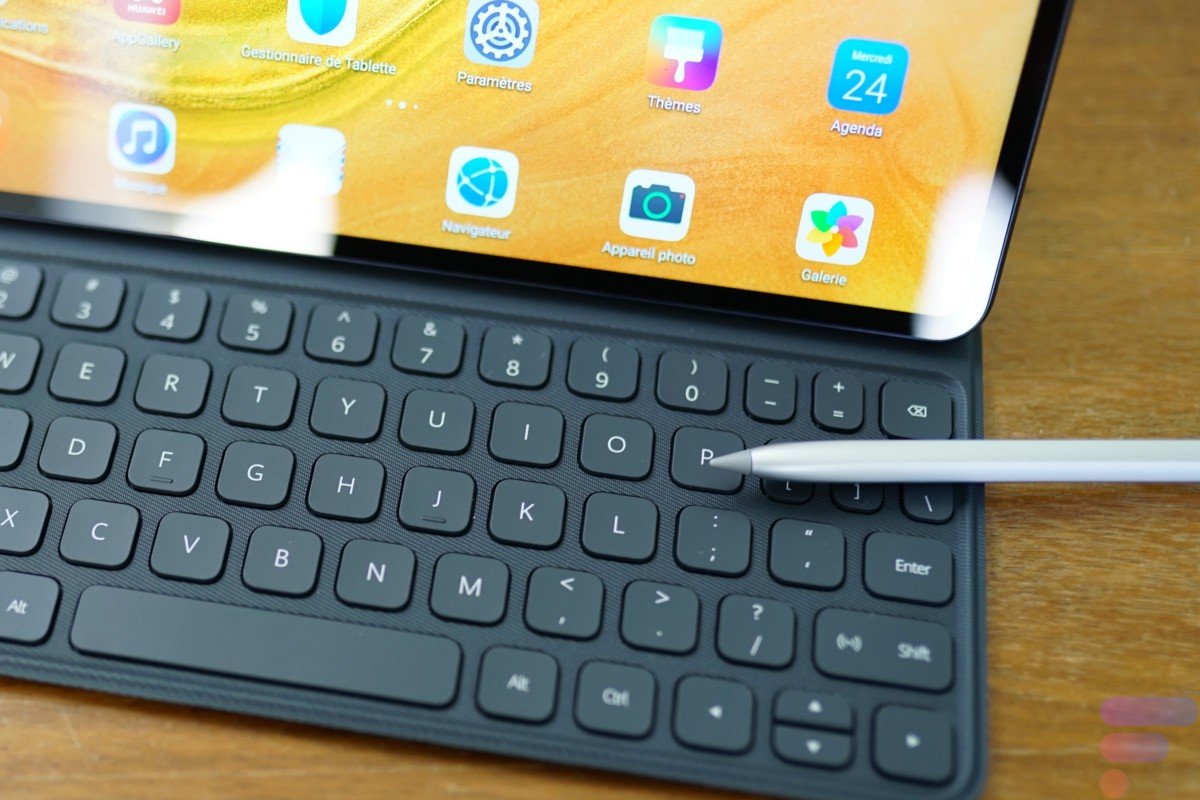 Note that there is a cellular version (4G and 5G ) with 22 integrated antennas, but they are all housed in the frame, so we do not see any visual differences between the only Wi-Fi version and the cellular version. 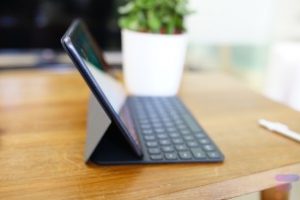 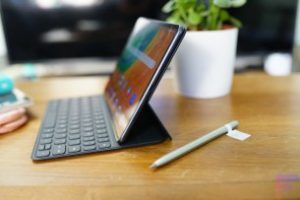 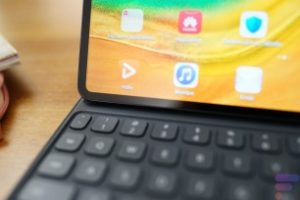 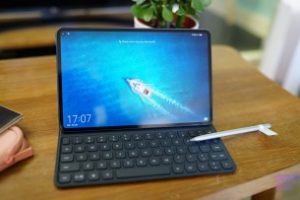 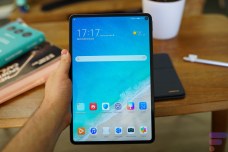 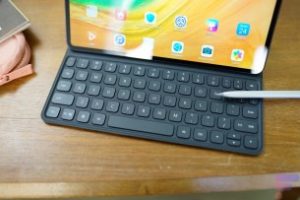 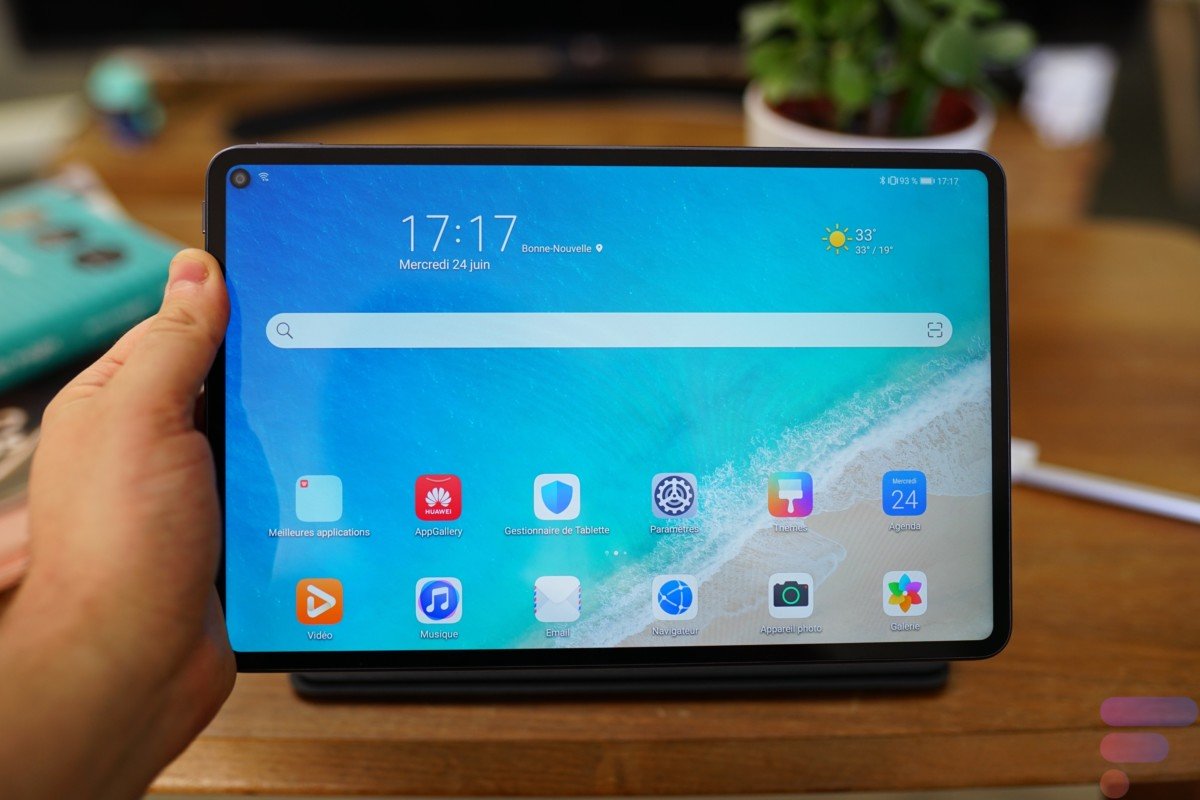 Overall, the screen turns blue. You have to manually switch to normal color mode to have more natural tones. On the other hand, it is the vivid mode that allows us to have good coverage of the colorimetric spaces. The most balanced is undoubtedly to remain in the mode vivid colors and to adjust the palette on tones a little redder. 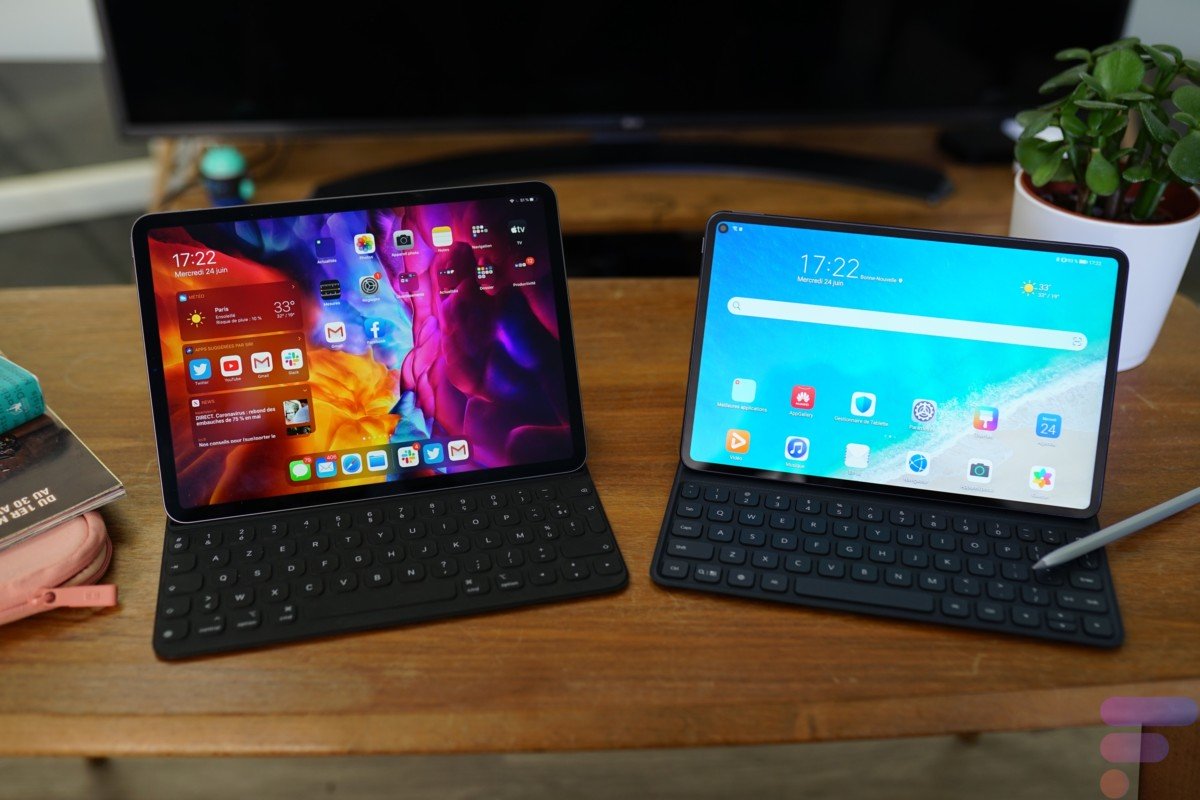 The 16: 9 format (wide format of the cinema) is very pleasant to watch videos, less to consult content in portrait mode. It’s true that I’m still used to the iPad (4:3), which has a more versatile display ratio.

The Most Powerful Android Tablet

The MatePad Pro uses a high-end smartphone processor, it is the same solution as the Mate 30 Pro and the P40: the HiSilicon Kirin 990 SoC associated with 6 GB of RAM. No surprises regarding performance, in terms of fluidity, this tablet is certainly the most fluid Android tablet on the market. Whether at Samsung or other manufacturers, there is no more powerful Android tablet.

We passed several benchmarks to it, including GeekBench 5 where we obtained a score of 753 points in Single-Core and 2891 points in Multi-Core. The MatePad Pro can, therefore, boast a power equivalent to 70% of the performance of an iPad Pro. Apple’s tablet that costs… almost twice the price of the MatePad Pro.

For all the uses that one can have with an Android tablet, the MatePad Pro will have enough power. 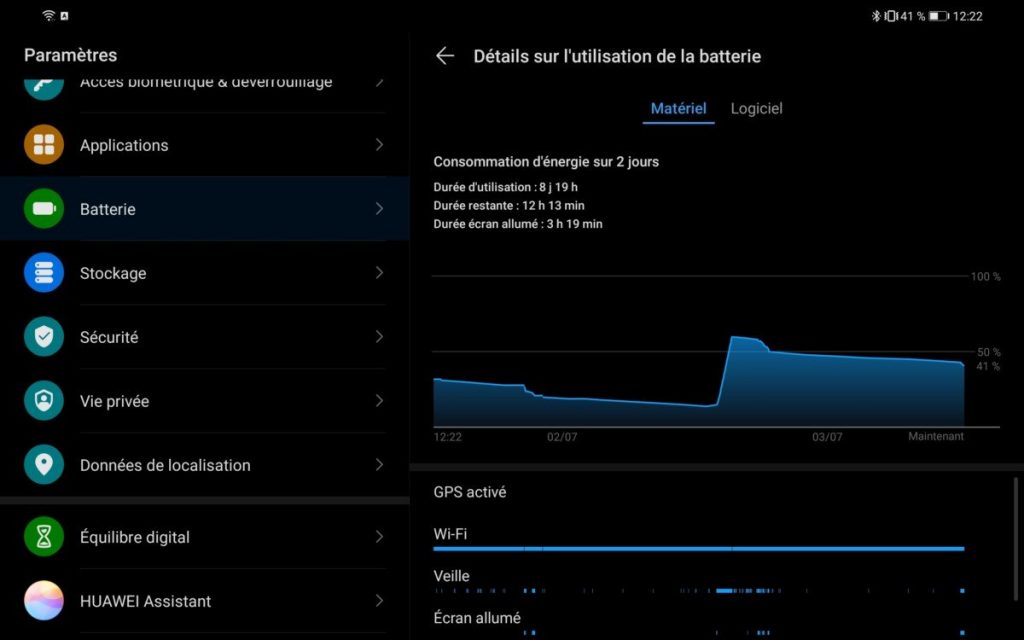 With the reverse wireless charge, it can give a boost to your smartphone, this can be useful even if it is generally a gadget function. This is also the case for wireless charging, few supports are capable of accommodating a 10.8-inch tablet. In all cases, the MatePad Pro offers a relatively fast charge and good autonomy, we appreciate the standby which consumes little energy.

The problem is that the tablet comes with a 20W charger – half the maximum power – so charging is slower if you don’t buy another charger.

The Huawei MatePad Pro is an Android 10 tablet with the EMUI 10.1 interface. As you probably know, as a product of 2020 … it cannot benefit from Google services because of the US embargo. 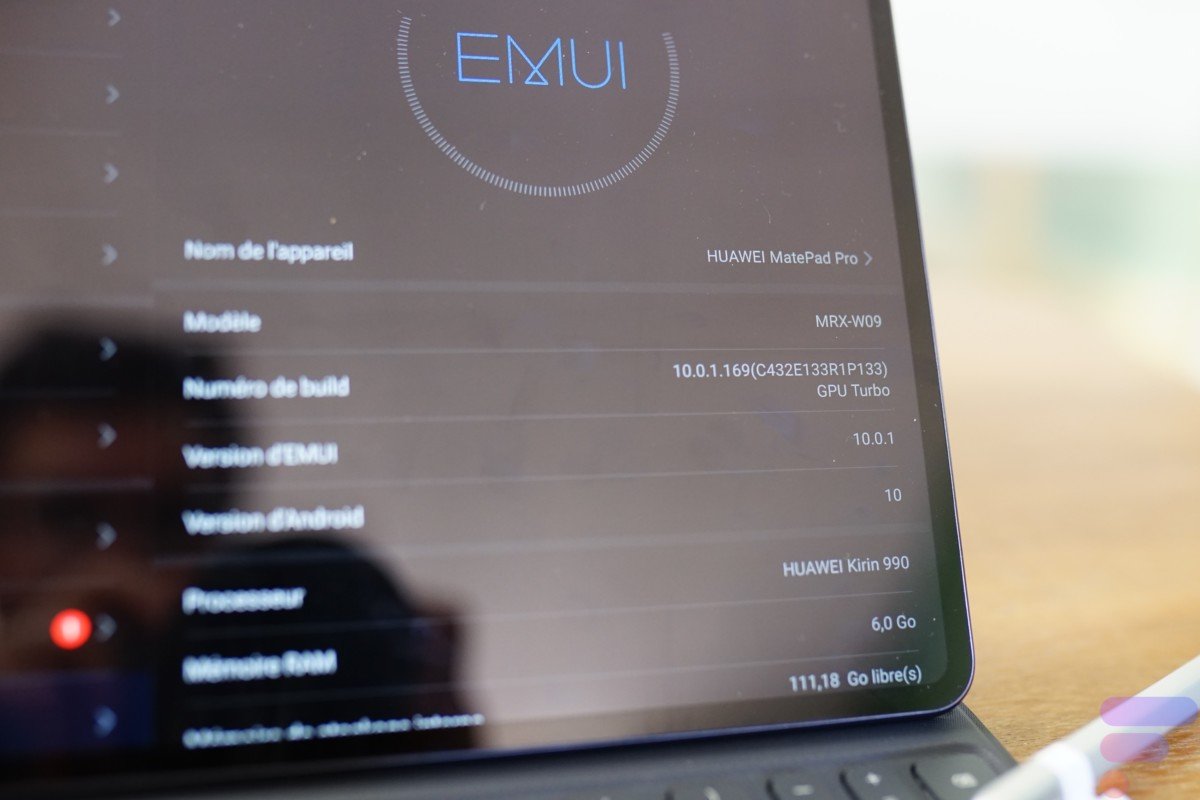 We have a proverb in Brittany, “An heni na avantur netra nà koll nà gounid ne ra” that we can in English by “He who risks nothing neither loses nor wins”. This expression does not work in Huawei’s current situation. It is clear that Huawei is forced to take risks so as not to lose everything. And Huawei has a lot to lose.

Taking risks for Huawei means selling Android mobile devices without Google – we tested the P40 Lite, the P40, or the Mate 30 Pro. The observation is always the same: the hardware is almost flawless on these devices, the software is handicapped by the absence of Google. With the Huawei MatePad Pro, the script is written in advance.

Doing without Google is possible. Nevertheless, Android was built so that developing an alternative version of Android is a risky task. Android is an open-source (AOSP), you can download, compile, and install it on your device. However, Google Play Services provide access to Android applications and essential system services (notifications, geolocation, security, etc.).

Huawei’s job is therefore to build and develop its own services, Huawei Mobile Services (HMS) and its application store called AppGallery. There are almost 3 million apps available on the Play Store, so the work is very tedious. You have to contact the publishers, convince them, provide them with the tools necessary to adapt their applications, and maintain a regular relationship with the developers. Since 2019, the AppGallery has been growing day by day, but it will take time to make it a viable alternative to the Play Store. 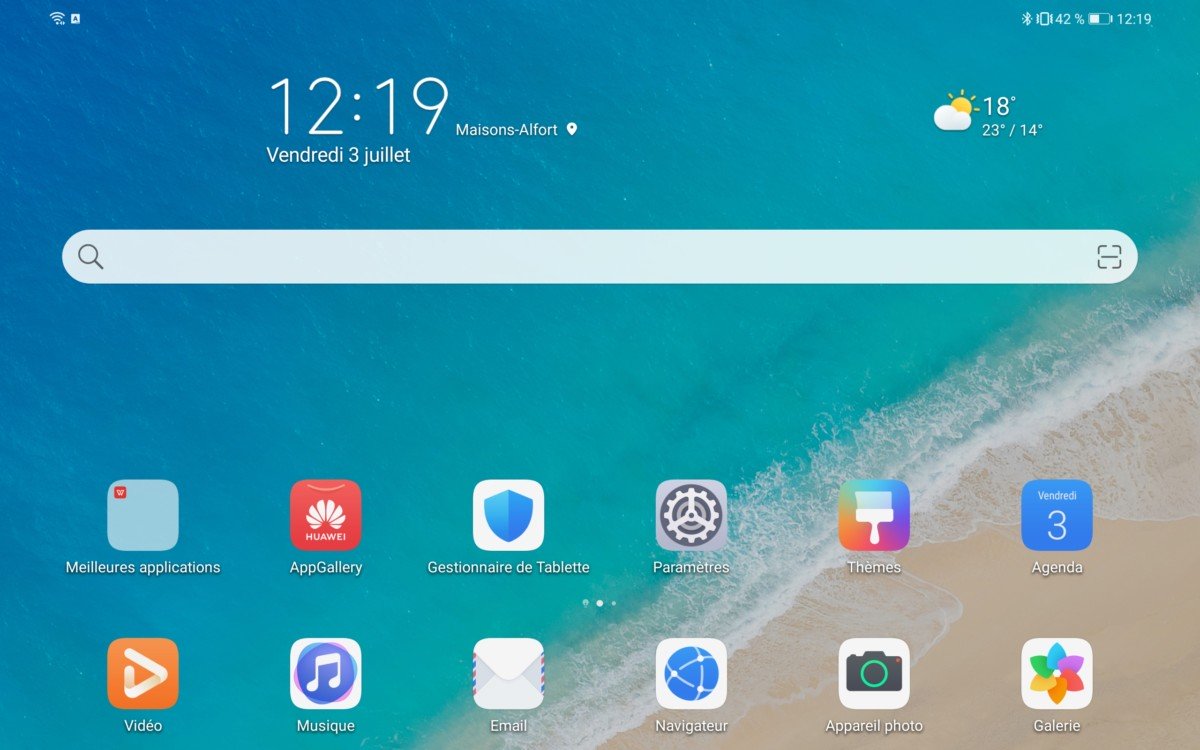 Finally, you have the option of installing Google Play Services, including the Play Store, Google Maps, Gmail, Chrome … I tried it and it is possible. However, the method is not simple. It requires downloading files from a dubious source, using a PC with a specific program … In short, it is not within the reach of everyone. Personally, given the installation method, it seems more logical to me to consider purchasing the MatePad Pro completely without Google services.

Concretely, the MatePad Pro will ask you to learn how to install it. APK files, to pay attention to the source of these files… In short, either you have the skills and the patience to do so, or you have someone close to support you. Finally, if we compare it to Windows, this amounts to installing.EXE. Except that on Windows 10, program editors distribute their files directly. On Android, this is rarely the case, so beware of the source of the files you recover.

To illustrate this risk … I didn’t need more than 30 minutes to find you the perfect example. I was looking for a working APK file for the Netflix app … until I came across a working version that asked me for questionable system access rights and which is probably used to recover Netflix accesses for resale. So you have to be careful, very careful. 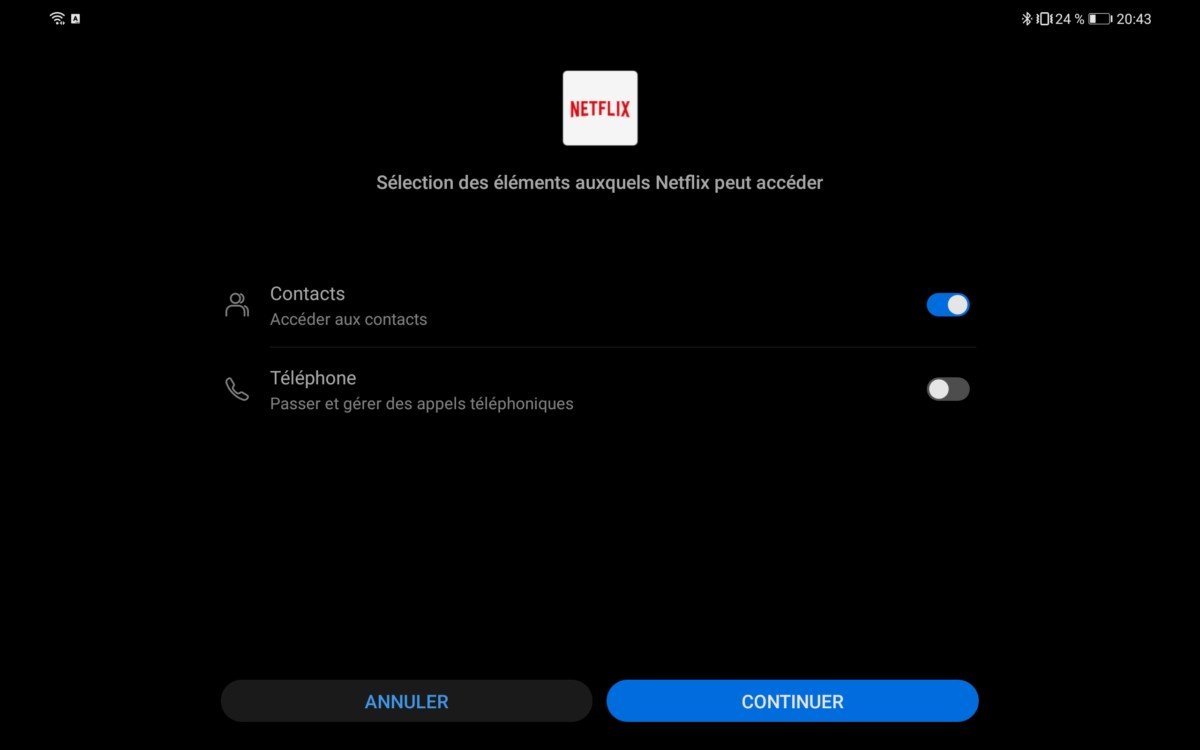 After many tests, we find that many applications, including Disney +, do not work. Once connected to Disney +, for example, the application loads the profiles, but systematically crashes when you want to access the video catalog. Other streaming apps like Wakanim, DNA… work, but in low quality. I took the opportunity to check the status of the pre-embedded DRM, the Widevine security level is L3.

The whole experience is fluid, the performances are there. Multitasking is relatively well managed, you can open a lot of applications at the same time and display several thanks to a function that allows you to open an app in the foreground in a reduced window.

Effective Cameras (For A Tablet)

On the MatePad Pro, there is a 13-megapixel camera (f/1.8 aperture) on the back and an 8-megapixel front camera (f/2.0 aperture). We appreciate the presence of an LED flash on the back with the possibility of shooting in 4K at 30 fps.

In fact, the basic camera application has the same functions as that of a smartphone, including the night mode. 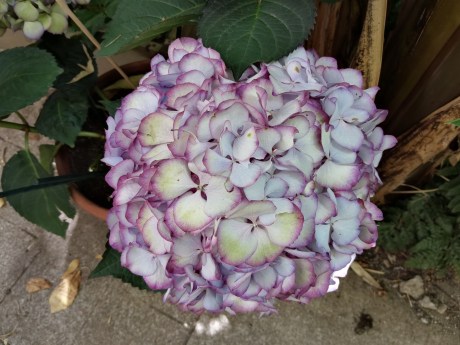 There are several variants of the MatePad Pro with 6 GB of RAM if you choose the 128 GB model, but 8 GB if you choose 256 or 512 GB of internal storage. There is also a cellular version. In some countries you will only find the 6 GB/128 GB version on Wi-Fi only, its price is 620 dollars without the keyboard and 680 dollars with the keyboard.

THANK YOU FOR YOUR READING

MacBook Pro 2020: Everything You Need To Know About Apple’s Next Laptops