IPad Air 2020 Test: The Best Alternative To The iPad Pro

IPad Air 2020 no longer looks like an iPad. Positioned in the middle of Apple’s lineup, its new version now brings it closer to the iPad Pro. New design, redesigned Touch ID button, and top power, is it a cheaper alternative to the high-end model or just an ersatz?

A New Wind On Design:

Enter a new era for the iPad Air, which returned to the smell of sanctity at Apple last year. But if it was with a design already known and proven, in 2020 it is the revolution for the 10 years of the range. This time he is eyeing the iPad Pro, of which he is more than ever a little brother. 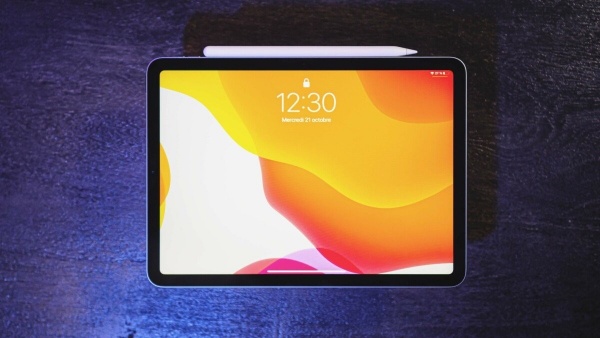 Here is an iPad with straight edges, slightly curved at the corners, with more refined and regular borders on all four sides. We will not say fine, because they nevertheless remain clearly visible. The camera is hidden on the top edge when holding the camera vertically. It’s not a True Depth camera like on the iPad Pro, however. You will therefore not be able to take advantage of facial recognition and thus unlock your device by simply looking at it.

Compared to the 11-inch iPad Pro, there is an identical chassis (24.76 x 17.85 cm). But the iPad Air is slightly thicker (6.1mm versus 5.9mm), which is almost invisible to the eye. So we have the same sensations when holding it and the iPad Air is handled quite well with one hand. On the back, we find the Smart Connectors which will magnetize the keyboard shell and any other compatible protection, unfortunately still optional.

The particularity of this iPad Air 2020 and its new look is also the addition of a little color. In addition to the traditional space gray, rose gold, and silver, we now have the green and sky blue that we have in hand. It gives a little pep to the whole. As always with Apple, the finish is particularly neat with its aluminum frame quite pleasant in hand. The straight edges at least have the advantage of making it easier to grip. 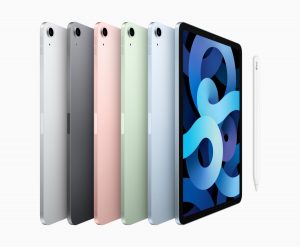 There is no ProMotion technology here, which is a screen refresh rate of 120 Hz which makes scrolling smooth. If you’re used to it, you might find the action on an iPad Air a little choppy. Otherwise, there is little chance that you will be embarrassed. The screen has an anti-reflective and anti-fingerprint oleophobic coating, but like all screens, your fingerprints show up pretty quickly anyway. 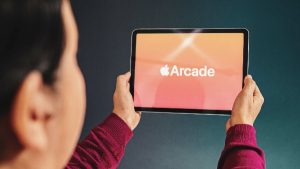 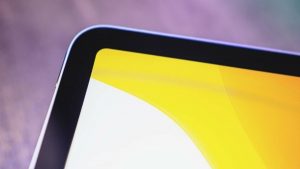 It has TrueTone technology which allows it to adapt to ambient light. It is also possible to activate Night Shift to switch to a less bluish brightness, more suited to dim light or evening. Technologies are now common on smartphones and tablets.

The screen displays a rate of 437 cd/m² and appears to be able to go up to the advertised 500 nits in direct sunlight. It promises a very wide P3 color range. The color rendering is quite convincing when looking at the pictures on the screen or even a video. We will perhaps be a little more choosy on blacks who could sometimes be blacker.

The screen of the iPad Air is very well made. However, we found it a little worse than the 12.9-inch iPad Pro which is brighter (up to 600 nits). But that may be an impression given by the somewhat thicker edges at the scale of the tablet. Size advantage: It offers excellent glare-free viewing from a wide variety of angles.

New to this iPad Air 2020 is also the arrival of the Touch ID fingerprint reader on the edge of the tablet, at the top when you hold it vertically. This will be used, as before, to unlock the device, pay via Apple Pay, or validate your purchases on iTunes. 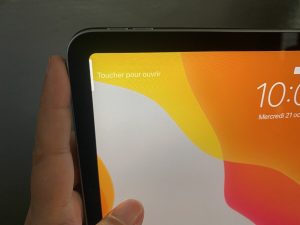 Good Touch ID initiative on the power button: to encourage you to configure it in two positions (landscape and portrait) for two different grips. You can also add the fingerprint of another trusted user. But he will have access to the same content as you because remember, the iPad still does not offer multi-account possibilities.

Obviously, if you were used to Touching ID on the bottom of the screen, that changes a bit, but the adoption is intuitive and immediate. The positioning is well found. The large surface for placing the finger will delight all hand sizes.

It still proves to be responsive and the unlocking is quick to activate the iPad Air. The same goes for validating purchases in the App Store or via Apple Pay.

IPad-OS 14, The Chic And Shock Asset:

iPadOS 14 is a real shocker for iPads. Fluid, fast and responsive, all manipulations can be carried out without suffering. The iPad Air comes with iPadOS version 14.0.1 and we advise you to quickly update to 14.1 which brings a lot of improvements and fixes (support for 10-bit HDR videos in particular). 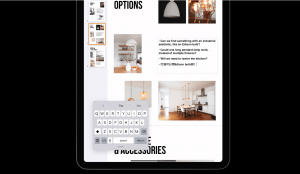 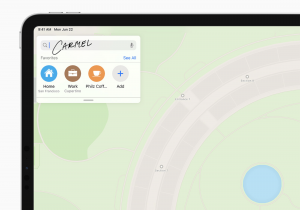 In short, you can do just about anything you want with an iPad Air without seeing it fail. It supports multitasking by split screen sharing or with other open tabs overlaying pages, video editing, and photo editing …

Design change and accessory change for the iPad Air. The new model is compatible with Apple Pencil, but second generation, the same as that of the iPad Pro line. It arrives with the same advantages as the other models: its great reactivity in taking notes or drawing. And iPadOS 14 gives it, even more, features like recognition of handwriting and drawings of shapes that are automatically transformed, annotation of web pages or PDFs. 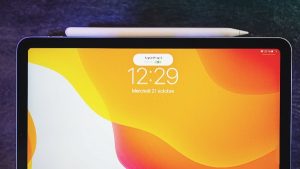 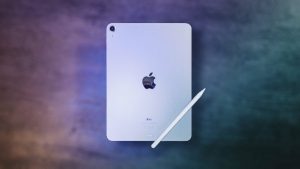 A Battery That Sometimes Makes Holes:

As is often the case with Apple, the autonomy of the tablets is quite decent, although it is not exceptional either. For classic use (surfing, video, email, office automation, games, etc.), it takes almost two days. Apple advertises up to 10 hours of continuous internet surfing or streaming video (a little less in the cellular version). IPad Air tends to drop in battery life quickly and sometimes without doing anything. We have found that it lost 5 to 8% on standby overnight. Two hours of viewing on Netflix and 30% battery is gone. 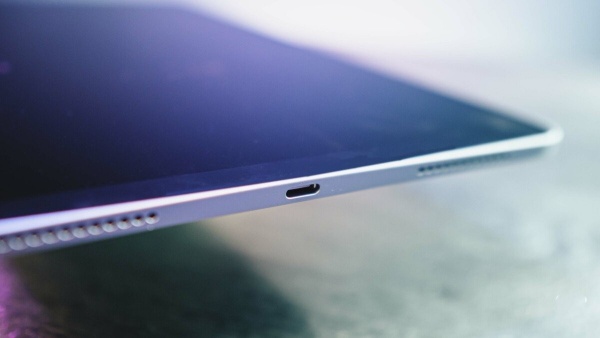 Allow a little over 2h30 for a full recharge via the now USB-C port. And this time around, the AC adapter is still in the box, but it also sports a USB-Type C port. So it can come in handy with the newer iPhone 12 that doesn’t have an adapter in the box.

The Most Powerful iPad:

It relies on the same new 5nm A14 Bionic chip that powers the iPhone 12, leaving behind the A12 Bionic last year. Either a more powerful chip than that of the iPad Pro (A12Z Bionic, a modified version of the A12 of the iPhone XS), but this one is strictly the same for iPhone and iPad. In other words, everything is made faster, in particular thanks to the learning capabilities of the Neural Engine which will try to optimize all your uses. For your own sake and that of the battery by saving as soon as possible.

Any game runs smoothly, without lag or the like. Whether it’s a nervous game like Call of Duty Mobile which generates multiple camera movements without flinching or a title like Sayonara Wild Hearts which puts your reflexes to the test during its motorcycle races and others. 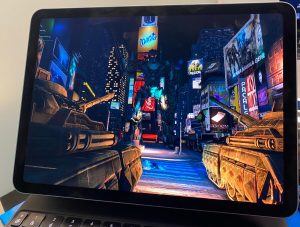 The multi-touch screen always responds just as well to commands (opening apps, dragging and dropping, highlighting, etc.). Click on the screen and the action takes place immediately. Obviously, for any office automation operation, the touchscreen keyboard is pleasant, but over time, it quickly becomes tiring.

We prefer a Bluetooth keyboard or the Magic Keyboard (the same as that of the 11-inch iPad Pro) which attaches magnetically to the back of the device and adds a USB-C port for charging, freeing that of the device. for other uses. It then truly transforms the iPad Air into a laptop PC while protecting it in a shell. And we greatly appreciate the integrated trackpad. Even reduced, it is very practical. Obviously, the price could be a bit ticking. 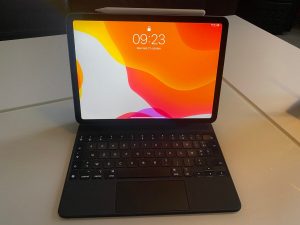 The presence of the USB-C port also has an advantage by allowing the transfer of files rather quickly (up to 5 Gbit/s). You can also connect external storage and any other device via a USB-C cable (camera, 4K screen, etc.). The iPad Air can also take advantage of the SideCar function to serve as a second screen for a MacBook, for example.

Regarding connectivity, it also embeds the Wi-Fi 6 standard and is Bluetooth 5.0 compatible. Some models can also count on a nano-SIM card slot.

On the iPad Air, there is a 12-megapixel wide-angle sensor (f/1.8) with Smart HDR to improve the rendering of photos, the possibility of taking Live Photos (animated photos of a few seconds) or panoramas quite large (up to 63 Mp). However, it does not have a LiDAR sensor to better adjust the depth. 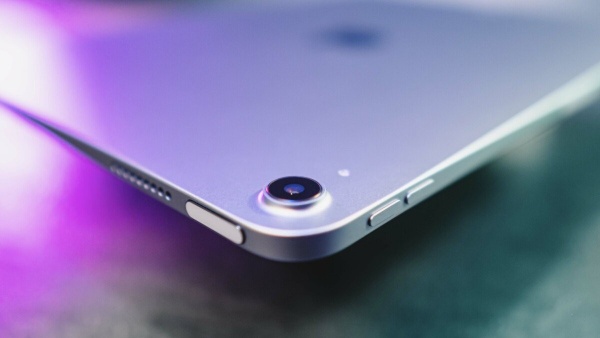 Overall the picture looks fine on the iPad Air, but don’t expect miracles. The device struggles to deal with darker areas and details. In broad daylight, the result is better, and the colors are a little better highlighted. However, it is never easy to take pictures with a tablet and the tablet does not cut it. Therefore, reserve the use of the device for illustration of a document or a quick sending to a contact. 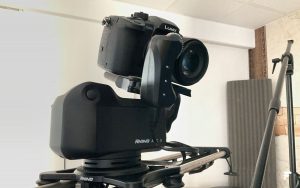 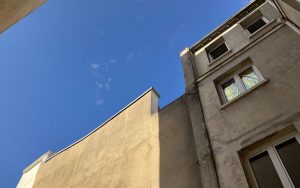 Up front, there’s a 7-megapixel (f/2.2) FaceTime HD camera that can shoot 1080p at 60 fps. It embeds Smart HDR technology (several shots taken simultaneously and a compilation of the best parts to create the final rendering). It takes advantage of a flash, automatic image stabilization, burst mode, and shutter release. It’s pretty rare to take selfies with a tablet, but they turn out to be passable.

It is also possible to shoot in 4K up to 60 fps (24 and 30 fps also available) or in HD 1080p at 30 or 60 fps. It is even possible to take a photo while filming in 4K just by pressing the shutter button. The weight of shot will be quite heavy (8 megapixels). The camera benefits from video stabilization (720 and 1080p), even for time-lapse videos (timelapse). Slow-motion video enthusiasts (slo-mo) will be delighted with the ability to shoot 1080p at up to 240 fps. The rendering is quite nice and of quality.

The Rather Surprising Sound :

There are two microphones on the front of the iPad. In video calls or recordings, the quality is quite good. The iPad Air has two stereo speakers, compared to four on the iPad Pro. They are positioned in landscape mode, one at the top and the other at the bottom of your tablet in portrait use. The sound is quite good and immersive. The stereo works great when watching a movie with action scenes and sound movement. 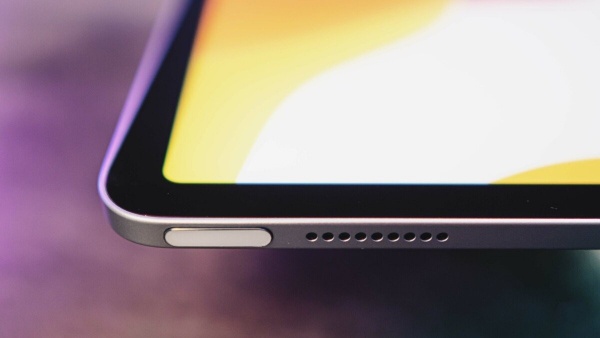 However, in the rapprochement with the iPad Pro, Apple sacrificed the jack.