Microsoft continues its offensive in the market for noise-canceling Bluetooth headsets. The Surface Headphones 2 offers some improvements for a lowered price. Enough to convince Bose and Sony? This is what we will see in this test. 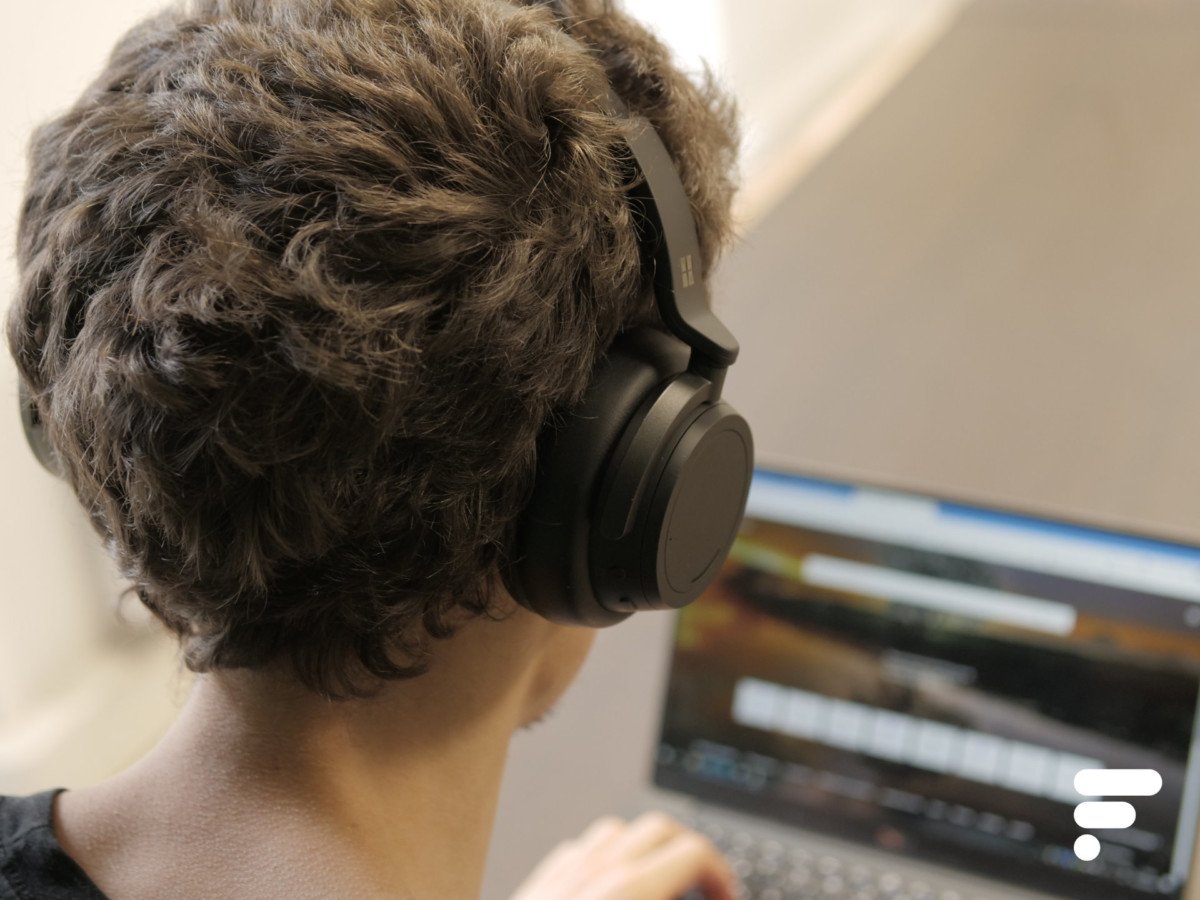 A little less than 2 years ago, Microsoft announced its arrival on the market for noise reduction headsets, facing Bose and its QC35 or Sony and its famous WH-1000XM3. This first generation of Surface Headphones, then rather convinced us, but the brand could not fully catch up with its competitors, while offering the same price. In 2020, Microsoft returns with the Surface Headphones 2.

The Return Of The Friend Molette :

You will see it quickly enough, the Surface Headphones 2 does not really revolutionize the design developed by Microsoft for its first headset. The brand’s engineers still made some changes, often welcome in terms of design. Let’s start with the most easily visible change: the arrival of the black color, in addition to the iconic light gray of Surface still in the catalog.

This black dress makes the helmet lose a bit of its identity but allows it to gain in sobriety and blend in more easily with the decor. As is often the case with Surface products, the finishes are excellent and the product emanates a good degree of confidence.

To adjust the Surface Headphones 2 to your skull, you have to go through the hoop and its rather classic slide system, here well implemented with a frame mixing plastic and metal which seems to be of good quality. The roll bar itself is covered with plastic foam that can keep it a little warm but is generally comfortable.

These are over-ear headphones, which therefore sit around your ears. In my opinion, this is the most comfortable solution, but often also the most cumbersome. Here the helmet cannot be folded and it will be enough to rotate the ears 180 degrees (against 90 degrees on the first generation), to put it on a desk, or put it in its bag. 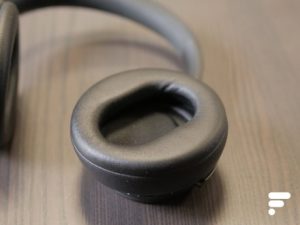 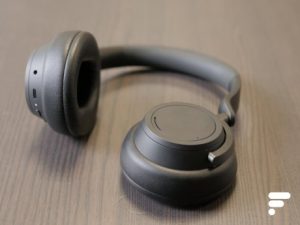 Compared to the headsets from Sony and Bose, I find the Surface Headphones 2 a little less comfortable over long sessions, due to the size of the headphones a little tighter, but above all the significant weight of the headphones, at 290 grams all the same. It is by removing it in these cases. You can see how warm it is.

It was already a reproach that was made against the first version and the weight has not changed by one gram. This feeling of having a helmet tightened around his head still hides a quality: the device holds securely in place, even after a frantic headbanging session.

What has not changed, and all the better is the ingenious wheel system offered by Microsoft. Each ear of the headphones hides. In fact, a rotary system allowing the noise reduction to be adjusted fairly finely, with the left hand or the volume with the right hand. This analog mechanism is really a good idea, much more intuitive and practical than a touch system or with physical buttons.

Touch, the Surface Headphones still offers it on each side to control the tracks: one press to pause or resume playback, two presses to go to the next song, or three presses to return to the previous song. Microsoft has also thought about automatically stopping playback when the headphones are removed, and resuming them by putting them back on their ears. I have not encountered false positives in these situations. 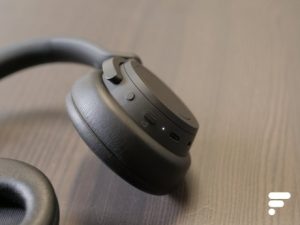 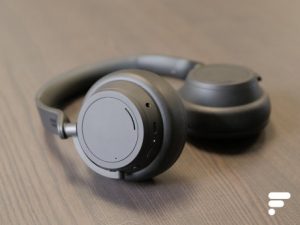 Let’s finish this owner’s tour by stopping on the connectors. If the Surface Headphones 2 obviously connects first and foremost with Bluetooth 5.0, it can also be wired with a standard 3.5 mm Jack cable and recharge with its USB-C port. The two physical buttons allow you to turn the device on or off and mute the microphone during calls. 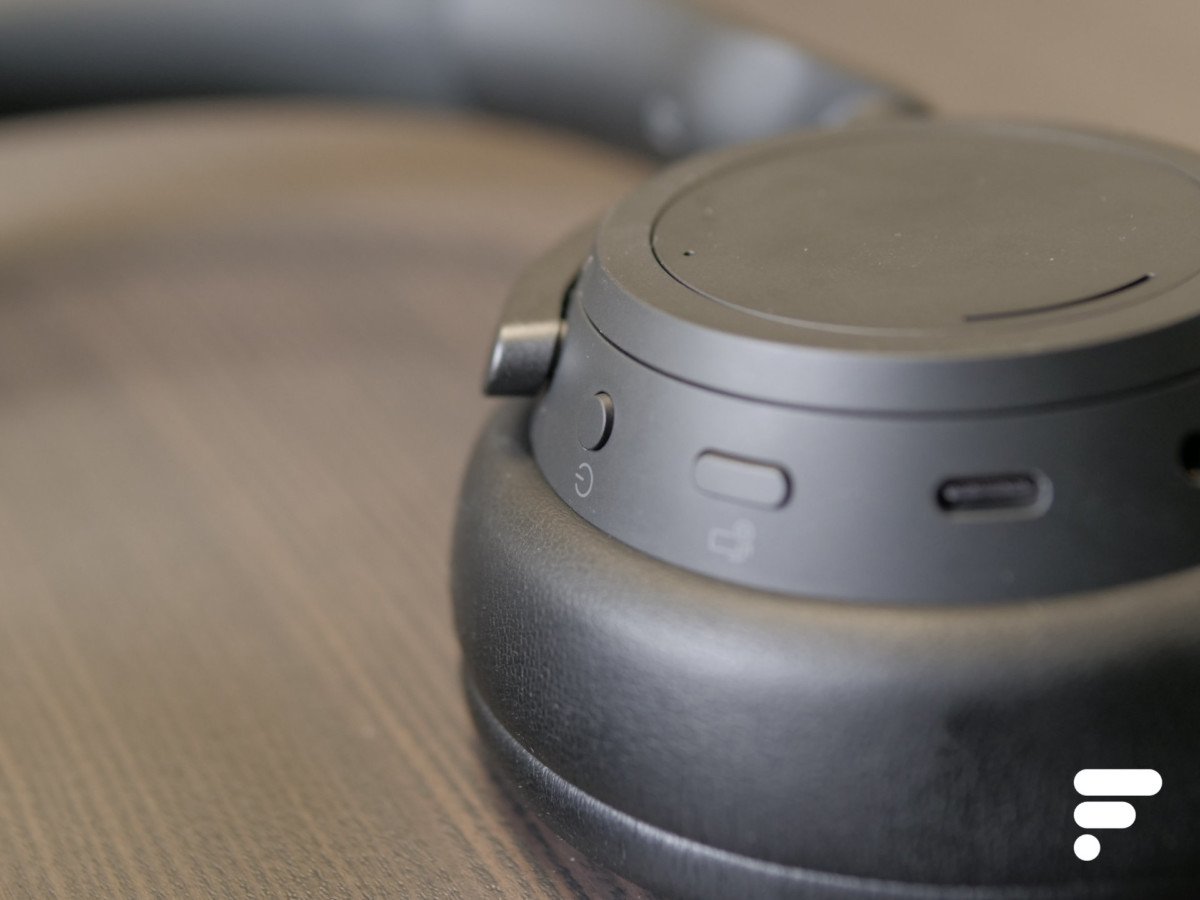 It should be noted that the buttons stand out more than on the first generation, which makes it easier to locate them with your finger.

Microsoft has not changed its noise reduction system, which can passively remove up to 40 decibels from ambient noise, and up to an additional 30 decibels using adjustable active headset cancellation.

Without reaching the heights of sound isolation offered by Sony or Bose with their most recent headsets, the noise cancellation of the Surface Headphones 2 is good enough to enjoy its music, whether while working in an open space or in public transport. Less constant noises, like an ambulance’s siren, will fall through Microsoft’s filter mesh. 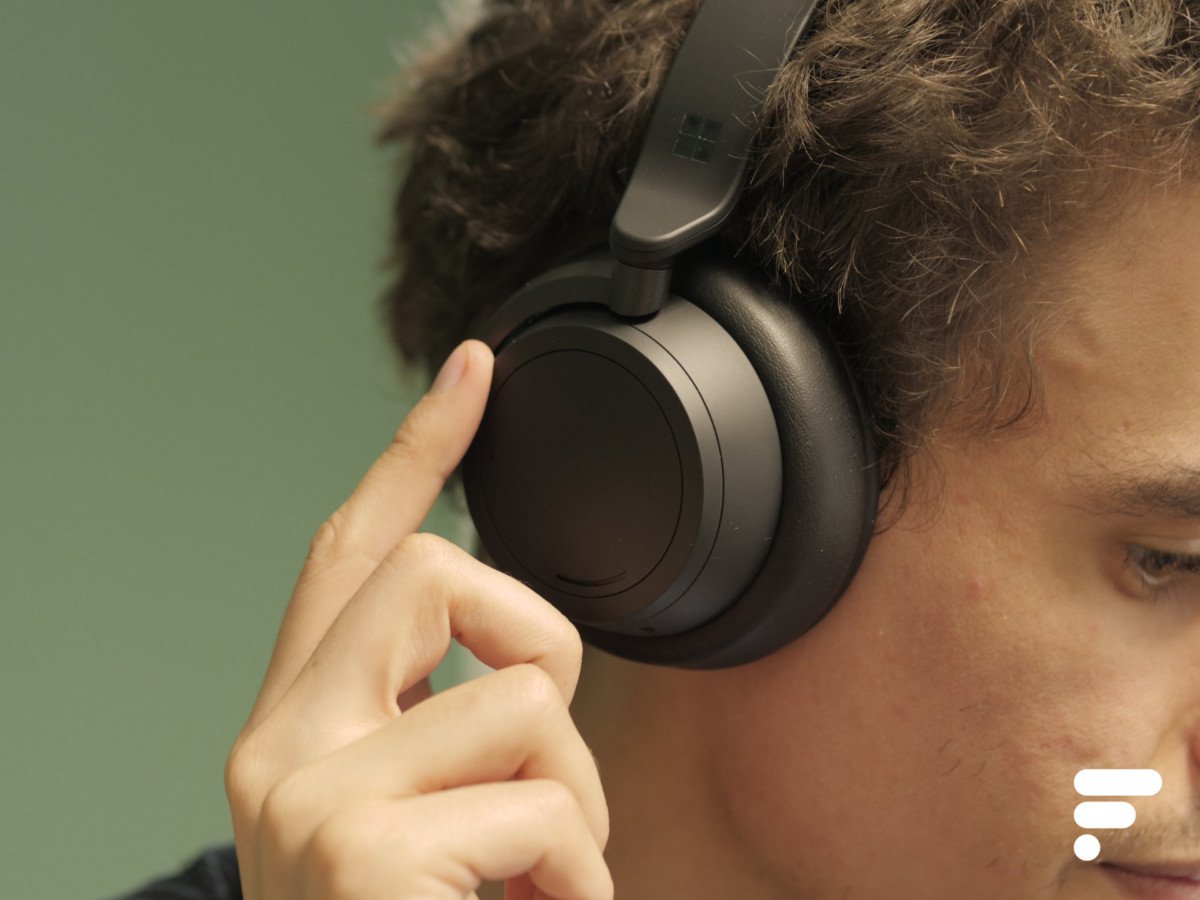 I find that the latter mode is particularly successful, compared to the equivalents at Bose and Sony, and really allows you to hear the voices of those present in front of you without having the impression of making a phone call.

The ergonomics offered with the knobs really allows you to change the level of isolation depending on the situation, where we tend to keep the maximum mode on other headsets by lazily looking for options in the brand application, or because we no longer know which button does what.

What should be remembered is that if it does not reach the level of the champions of the sector, the Microsoft Surface Headphones 2 still does very well in this exercise and also offers interesting innovations at the level ergonomics.

The Surface Headphones 2 uses the same audio architecture as its predecessor, with a 40 mm speaker for each side capable, according to the company, of reproducing sounds in the 20 – 20,000 Hz range. The brand nonetheless put upgrade the Bluetooth protocol to offer Bluetooth 5.0.

On the codec side, the classic SBC is still there, but this time it is joined by the aptX pushed by Qualcomm, which will be practical for Android smartphones. ACA is still not supported, however, so users of Apple devices like the iPhone will go through the SBC.

The default audio quality offered by Microsoft headphones is not its greatest strength. Please note that the sound offered here is not very bad either. Simply, we remain on our hunger with a fairly flat restored sound, which puts above all on its bass, whether on Eagles, Maroon 5, or Queen, to try to put your ears full.

Fortunately, you can adjust all of this in the Surface Audio app, which offers 5 level adjustment options. There are also 5 profiles, including the default “Flat” which is rather aptly named. There are also “classical”, “jazz”, “pop” and “rock”.

A good point of the headphones on the other hand is its capacity, to hold the same audio quality no matter the volume was chosen. Even at the highest volume, it manages to restore a correct sound that does not saturate.

With the integrated battery, Microsoft promises us 20 hours of autonomy in Bluetooth with noise reduction enabled. In fact, I got a little less than that, around 15 to 17 hours of music depending on the session.

Again, this does not reach the excellent lifespan of the Jabra 85H or Sony headphones, but it is still enough not to charge it every day. Good point: it is possible to continue using it when it charges.

Charging is done through the USB-C port, with the cable supplied in the box. A full recharge from 0 to 100% takes almost 2 hours, it is a bit long, but in 30 minutes I had already recovered enough autonomy to wait before finishing charging the helmet.

A Very Simple Helmet To Use

Forget the Cortana assistant built into the first generation of Surface Headphones, the management of Surface Headphones 2 now requires a new Surface Audio application dedicated to Microsoft audio products. The application is available on Android and iOS, but also Windows 10. Pairing on the latter is also quite easy: as soon as the headphones are on, a notification appears asking you to connect.

It allows you to adjust the equalizer in a few actions, manage the devices connected to the headphones, or even check the volume and level of noise cancellation. The application is simple and very well designed to be instinctive.

We like, for example, the short videos on offer to better understand how to use the functions of the device and the tactile shortcuts offered. When we turn on the headphones, we are greeted by an artificial voice that gives us an estimate of the remaining battery life and indicates which devices we are connected to. 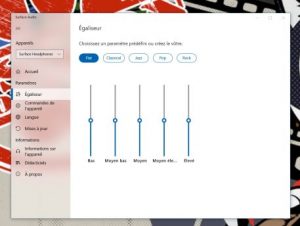 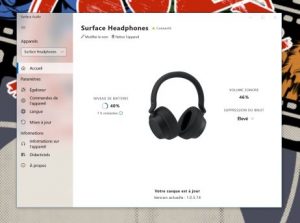 It is indeed possible to connect the headset to 2 devices simultaneously, your PC and your smartphone for example, but it can remember a larger number of paired devices (which will not be connected). Switching between devices is automatic and easy as soon as you start a song on the device you’re using. 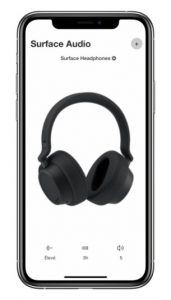 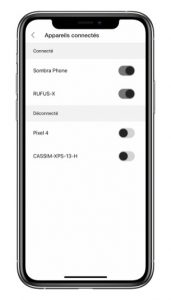 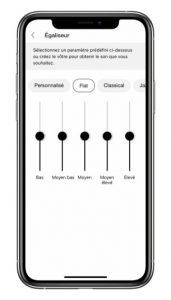 We find the same successful experience as with Bose on this point. Similarly, simply take off the headphones to pause the music. Putting it back allows you to resume reading.
100 Dollars Less From Launch

Let’s face it when it launched the first generation of Surface Headphones was too expensive at 380$, compared to its competitors for what is offered in terms of sound quality and noise reduction. With the Surface Headphones 2, Microsoft has revised its ambition downwards and offers its new product at 280$.

Unfortunately for the firm, arriving at the end of the cycle, its new headset is found in practice at the same price as the Sony WH-1000XM3 or the Bose Headphones 700 which have seen their prices drop considerably since their respective launch on April 2020.
SaveSavedRemoved 0

Sony Xperia 1 II Review: The Best Surprise of this Summer 2020