Achraf Grini
SaveSavedRemoved 0
We tested the Motorola Moto G8, a smartphone positioned for around 200 dollars. Will he manage to compete with the Chinese leaders in the sector? 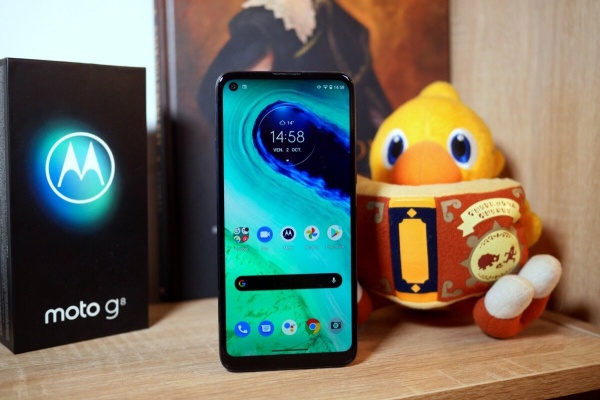 After the Moto G8 Plus at the end of 2019, Motorola has declined in 2020 its range in two new variants, the Moto G8 and the Moto G8 Power. The first, tested here, target the entry-level market. Can it compete with the Chinese competition?

This test was carried out with a smartphone loaned by Motorola.

A Design Not Very Original, But Complete :

In this price segment, we don’t usually expect very innovative designs, but we are increasingly starting to find quality finishes and that’s what Motorola is offering here. With fairly thick borders in 2020 and a bubble in the upper left corner of the screen, the Moto G8 is not original, but it takes the current codes to adapt them to the entry-level. It does however afford the luxury of abandoning the Moto G8 Plus’ teardrop notch and corrects one of the latter’s problems with a photo module that barely protrudes from the rear shell. 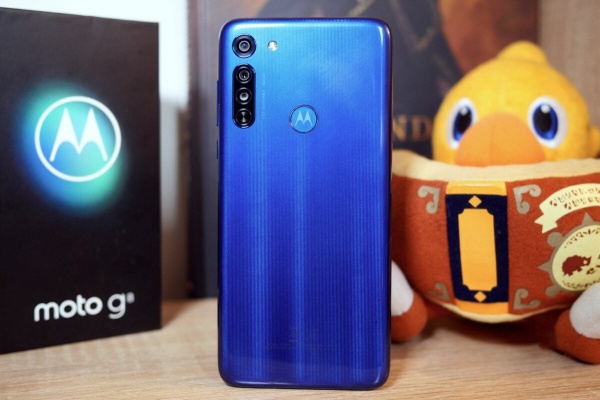 The chassis is plastic, which is quite usual at this price, but it doesn’t look completely “cheap”, although it does tend to catch fingerprints quickly. The rounded sides of the shell allow a pleasant and firm grip, but we note that the junction between the screen and the shell is slightly sharp. Not something to hurt yourself of course, but these are the kind of little details that prove you are on a 200 euro phone and not premium or mid-range.

In any case, those who wish will keep the silicone shell that dresses the phone when unpacking.

In terms of connectivity and handling, the Moto G8 offers a USB-C port on the lower edge and a Jack output on the top, as well as a drawer on the left for a SIM card and a microSD card ( or 2 SIM). On the right, we find the power button, streaked to find it with eyes closed (literally), and the volume control keys, a little high for my taste, without being totally unattainable. 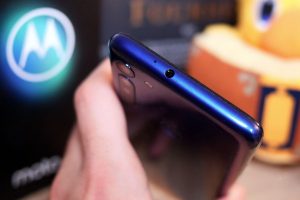 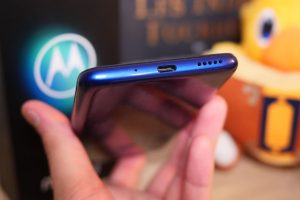 The fingerprint sensor, located on the back, is accessible to me, but with a fingertip. Someone with small hands may have a hard time unlocking their phone.

Moreover, with 188 grams on the scale, it is not very light, but this is a trademark of Motorola which does not hesitate to integrate substantial batteries into its smartphones in order to meet the first need of consumers: reassuring autonomy.

On paper, the 6.4-inch LCD panel of the Moto G8 seems a bit disappointing with its 720p HD definition (1560 x 720 pixels) and its 60 Hz refresh rate while its main competitors are at least Full HD +, even with a refresh rate of 90 Hz for the Realme 6 – which still acts as a UFO in this price segment. 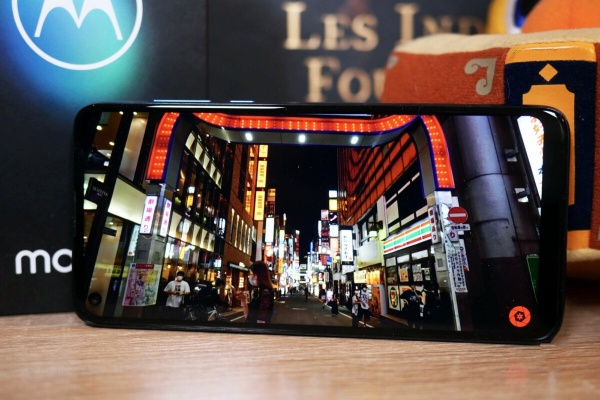 One could criticize the choice of 720p, but we must admit that even if the difference is visible to the naked eye, you still have to concentrate on it to notice it on a daily basis, which those who buy a smartphone around 200 dollars.

Once passed under our probe, the Moto G8 does not achieve impressive results, but they are not aberrant either, far from it. The CalMAN software thus measures a brightness ranging from 3.85 cd/m² minimum to 380 cd/m² maximum. This is not extraordinary but is sufficient to avoid burning the retina in the middle of the night and to provide barely sufficient readability in direct sunlight. 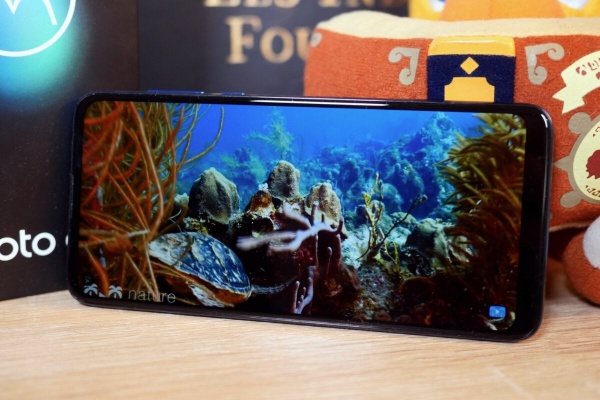 We also found a contrast of 1086:1 and a color temperature of 6880 K. It is not the ideal white point (6500 K), but it comes close. Entry-level LCD requires, viewing angles that could be better.

Motorola is one of the most Android-friendly builders as thought by Google and comes very close to it. We also find on board the Moto G8 at the time of writing (mid-September) Android 10 with its September security patch, knowing that 4 updates were launched during the 1st start. Suffice it to say that for a smartphone of this range, this is an achievement.

We find the basis of Android 10, starting with its dark system theme, although it takes a curious grayish tint in the menus rather than a deep black. You can also customize certain elements, such as the size of the home screen grid or its rotation with the screen. However, this is still quite limited compared to other manufacturers and it is, for example, impossible to precisely manage the colorimetry of the screen yourself. We must therefore be satisfied with three pre-recorded modes: “natural colors” (which are less natural than the basic mode), “contrast” or “Saturated” (by default).

Motorola nevertheless adds some additional pleasant functions, which do not come to play redundancy with the proposal of Google. We can for example cite the extended screenshot, the attentive screen – which remains on as long as you look at it, or the gestures that have accompanied the brand’s smartphones for years, such as the double sharp gesture to turn on the flashlight. A game mode (Moto GameTime) is also in the game, not to improve performance, but to make the experience more enjoyable by blocking notifications, gestures, calls or automatic brightness during games.

Overall, it’s a bit stingy, especially when it comes to personalization, but Motorola is playing on it sober and it’s a pretty understandable choice. Those who want to go further can always turn to an alternative launcher.

However, we would have appreciated the possibility of waking up the screen with a double tap or the presence of a facial recognition system, even 2D, but unfortunately absent. It’s a shame, especially with a hard-to-access fingerprint sensor. Fortunately, the latter remains very efficient and fast.

Performance Within The Competition :

On the performance side, the Motorola Moto G8 is powered by a Qualcomm Snapdragon 665 SoC and 4 GB of RAM. On paper, it is therefore much less efficient than its main competitors, which is immediately reflected in its results in benchmarks:

On a daily basis, for navigation in the interface, this is not really a problem. Those who are used to a flagship will notice that the animations are not the most detailed there are or that the heaviest applications take a little time to fully load, but you don’t really feel any lag or slowdown. the major interface during use.

As for games, the Moto G8 is not officially supported by Fortnite. For those who would still like to give it a try, it is possible and the game launches, but the conditions are clearly bad between poor graphics quality and violent slowdowns when you meet another player. It can still run games without too much hassle. Whether Call of Duty or Arena of Valor, both titles run smoothly with a very good framerate (60 FPS stable in the case of AoV) with settings set to average graphics quality. 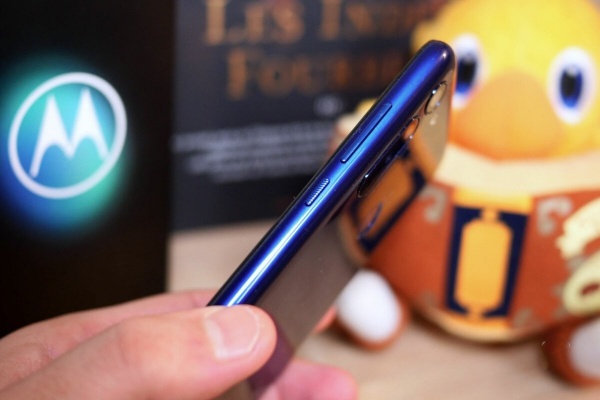 In the end, it is therefore doing better than the Redmi Note 9 at this level, even if it remains a notch below the Realme 6.

The Moto G8 follows the trend of the proliferation of photo sensors with 3 modules on the back:

Unfortunately, this is clearly the weak point of the phone. Even in broad daylight, the shots lack sharpness and when zooming in the image you quickly notice that the outlines drool and lack sharpness. The definition is not there and you can notice a little grain in some dark areas. 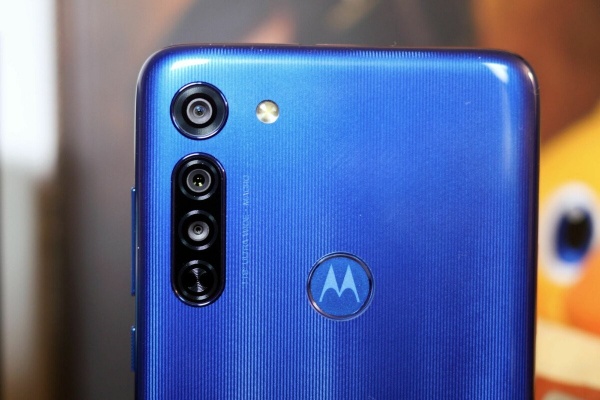 The latter also quickly lose information. It’s a shame since the bright areas on the other hand don’t have this problem of dynamism.

At night, the defects stand out even more with an appearance of noise over the entire image, a glaring difficulty in fixing a moving object even in well-lit areas, and management of catastrophic highlights leading to burnt areas and the effects of lens flares. 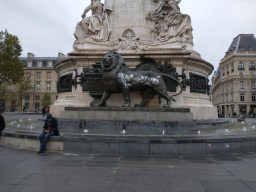 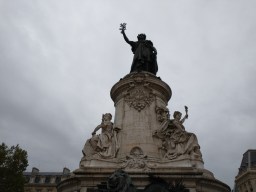 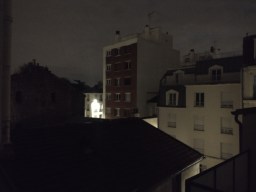 On the ultra-wide angle, we find the same problems, but even more, marked. Some problems that only appear at night on the main sensor are present here even during the day, accentuating the lack of sharpness and adding grain. 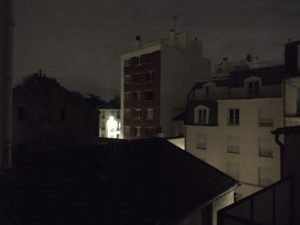 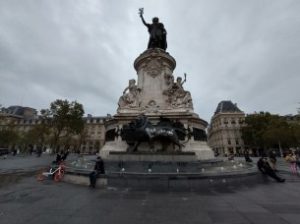 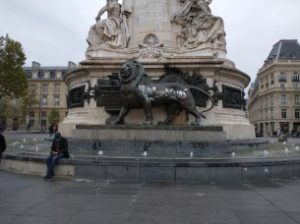 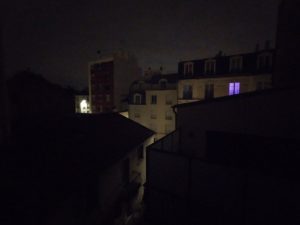 In either case, even on the phone screen, the quality is clearly below expectations.

Up front, there’s an 8MP front sensor paired with an f/2.2 lens. Do not expect a better result than on the main modules, it is sometimes even worse with difficulty in focusing, especially in this period when the mask prevents the algorithms from recognizing faces properly.

The grain is omnipresent, the dynamics are difficult to manage and the portrait mode (even without a mask) has difficulty in cropping the subject correctly. In short, the Moto G8 won’t be the place to show off your best Instagram profile, day or night.

Motorola has been emphasizing the battery life of its smartphones in recent years, and the Moto G8 is no exception. Its 4000 mAh battery is more than enough to power its 720p screen and its economy processor for very long hours.

As usual – when we’re not confined – we ran our automated SmartViser test on the Moto G8 which lasted 12 hours and 49 minutes. This is less than the 14 hours and 58 minutes of the Redmi Note 9, but it is clearly in the high average, allowing the Moto G8 to enter our recent TOP 10.

It, therefore, shows no resistance to last a full day, even with demanding consumption. It’s not uncommon to go to bed with 40-30% battery power, even after a long day. By playing thrifty, you may even be able to grow up to 2 days …

Unfortunately, the Moto G8 does not offer wireless charging and the charger delivered in the box does not exceed 10 W. So allow 2 hours for a full charge, which is starting to take a long time, even at this price segment.

Where To Buy The Motorola Moto G8?

The Moto G8 is available for around 200 dollars from many dealers. At this price, we will hesitate a lot with the Realme 6.
SaveSavedRemoved 0