The Galaxy Note 20 and Note 20+ are expected to arrive in August 2020, but many of their technical specifications and features are already known thanks to information from industry insiders. The Note 20 and Note 20+ would be deprived of x100 zoom, a feature yet very highlighted on the S20 Ultra. 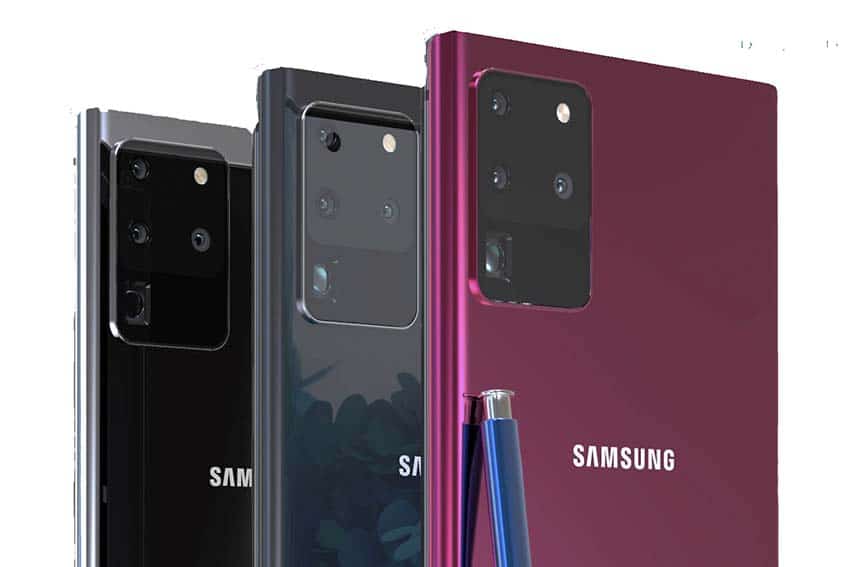 One of the most prominent features of the Samsung Galaxy S20 Ultra is the x100 zoom. Unnecessary for some, amazing for others, this photo option has been much talked about. However, the future Galaxy Note 20 and Note 20+ would apparently not be eligible. 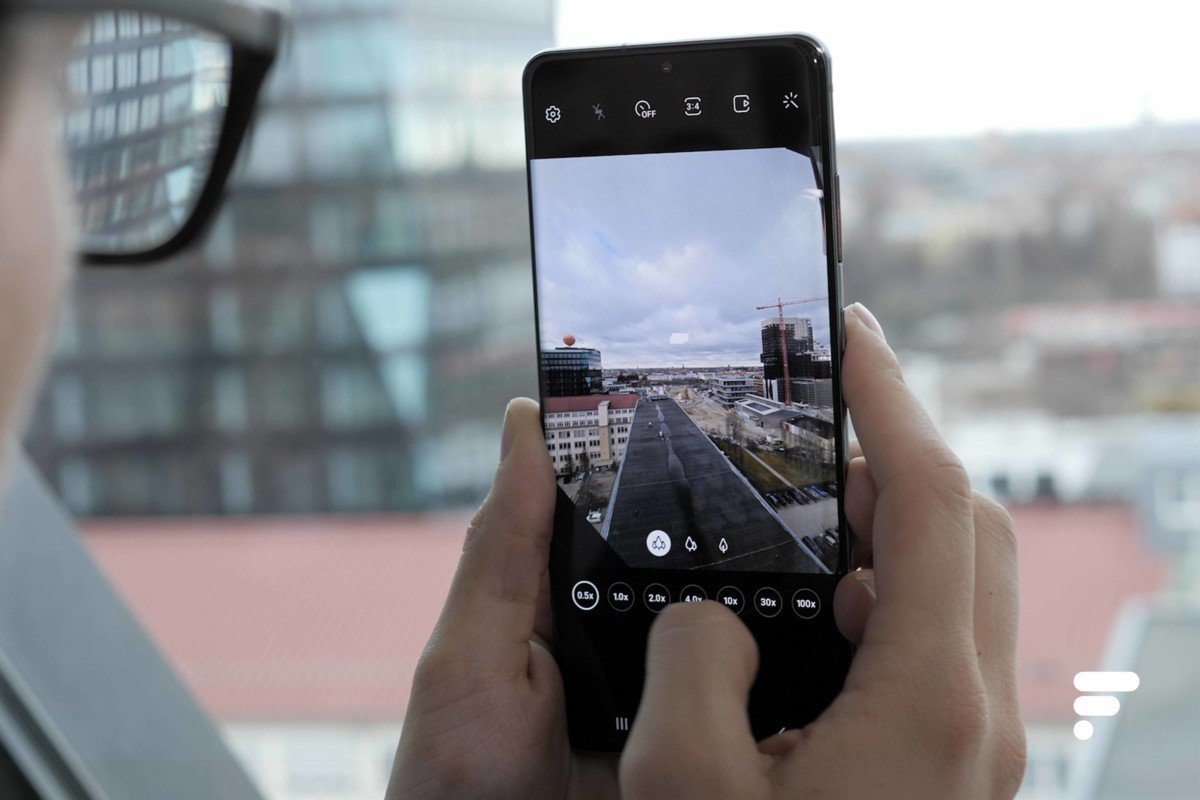 Like every year, Samsung will launch its new Galaxy Note series in the second quarter, about 6 months after the release of the latest Galaxy S smartphones. The South Korean manufacturer has not yet officially communicated about it, but it has struggling to keep the characteristics of its next flagships secret. Numerous leaks from reliable sources tell us about the upcoming Note 20. We will summarize in this file everything there is to know so far.

What will be the Release Date of the Galaxy Note 20?

As of this writing, Samsung has yet to release the date of its Unpacked event for the second half of 2020. It is highly likely that the announcement conference will not be possible in physics due to the risks associated with the COVID-19 epidemic. In recent years, the Note series was introduced either in August or September. Last year, the Note 10 and Note 10+ were presented in early August, and for sale on August 23. We can expect a similar timetable for their successors. 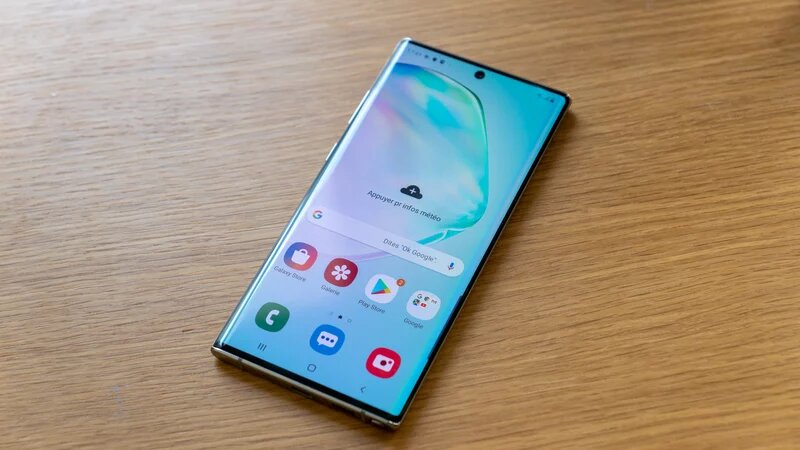 How Much will the Galaxy Note 20 Cost?

For the moment, no credible leak has given us information on the prices that Samsung intends to charge. These should notably depend on 5G compatibility. If present, Note 20 should be more expensive than the Note 10. Otherwise, it should be displayed at approximately the same price between 1051 and 1326 dollars since there are no major innovations in this new generation of smartphones.

How Many Different Models for the Galaxy Note 20 Series?

In recent times, the trend in the smartphone market has been the proliferation of models and configurations in the same series. A strategy that covers more price ranges, and therefore attracts more potential consumers.

Note that the manufacturer could also show us the Galaxy Fold 2 folding screen smartphone in parallel with the presentation of Note 20. It will be his third mobile adopting such technology after the Galaxy Fold and Galaxy Z Flip

There should be two models with the Note 20 and Note 20+, each available in several variants of RAM and storage space. If Note 20 Lite there is, it will be launched later, as was the case for the Note 10 Lite, which appeared only in March 2020. Samsung does not, therefore, adopt the same strategy as for the Galaxy range S, which is entitled to three models since the S10.

You can find in the table below a summary of the technical specifications of the Galaxy Note 20 and Galaxy Note 20+. Keep in mind that some data is not yet certain, while others are even unknown at this time. We will complete it as new information becomes available.

What Design for the Galaxy Note 20?

For a while, the possibility that the Galaxy Note 20 had a front photo sensor under the screen was raised. Samsung is working on such a technology, which has the merit of having an “all-screen” front panel without borders, notch or punch, and bypassing the retractable camera system called “pop-up”, which poses problems of durability and speed of facial recognition. Samsung doesn’t really appear interested in either of those when it comes to its top-tier phones. Yes, the company dabbled with a flip module on the Galaxy A80, which looks cool, but does add some bulk and take away from precious space within the phone.

But it will not be for the Note 20 from photos stolen from the mobile. We find a punch in the upper axial part of the slab, as on the last flagships of the brand “Note 10 and S20”. No changes planned in this regard, therefore. On the other hand, the manufacturer could incorporate a new generation of fingerprint reader under the screen, more efficient, and with a much larger surface. To summarize, this Note 20 will be aesthetically a mixture between the Note 10 and the S20. 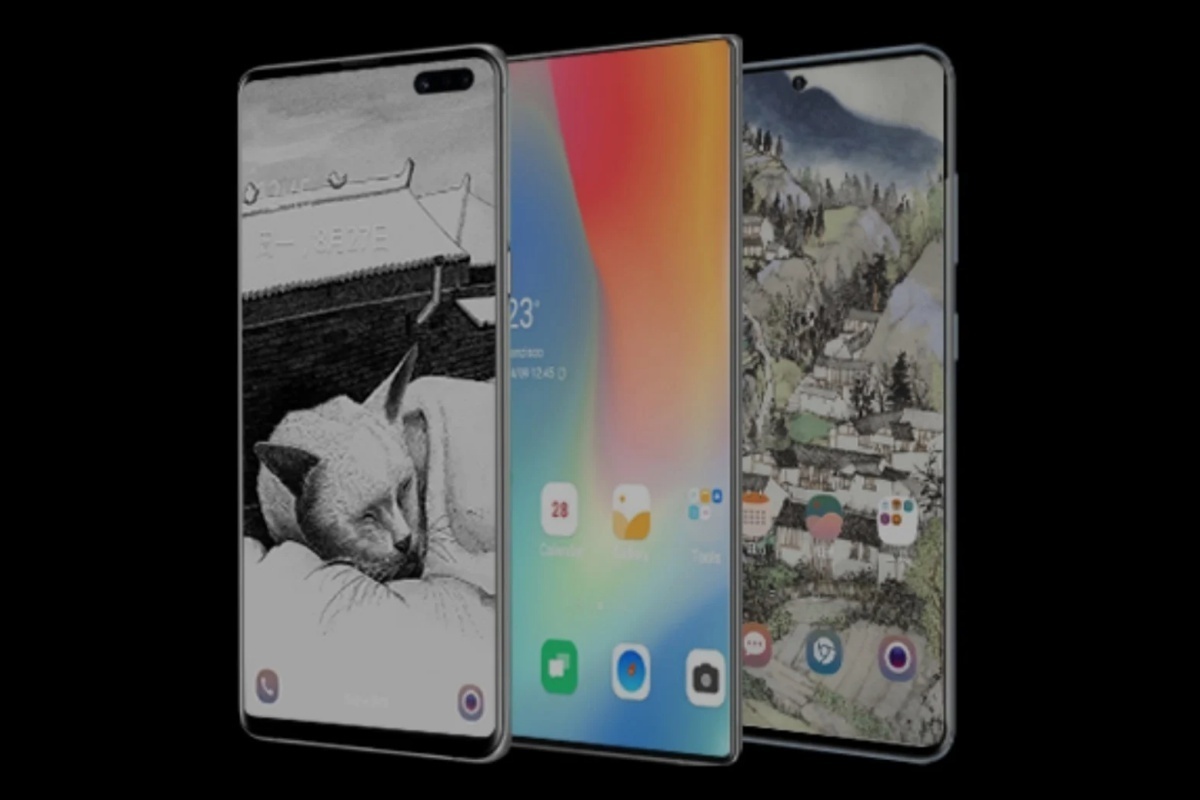 An OLED screen, of Course

Who says Samsung, says OLED. If the group sulks this technology on televisions, it has been using everything going on its mobiles for many years already. Even its mid-range smartphones are entitled to it, while this characteristic is sometimes reserved for the high-end among the competition. Samsung even provides the OLED panels for Apple’s iPhones, that is to say, it has control over this sector. The screens of Samsung phones are often their main highlight, and Note 20 should confirm the trend. 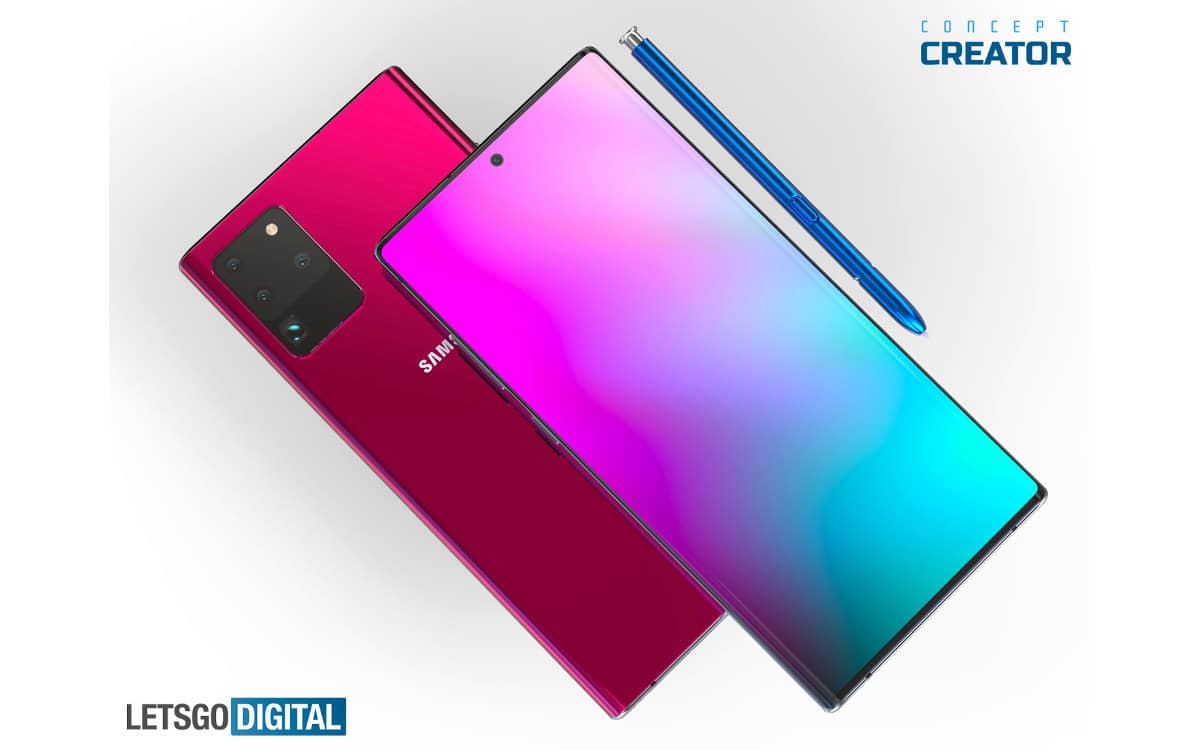 The Note 20 panel should have a diagonal of 6.42 inches, against 6.3 inches for the Note 10. It would display an FHD + resolution of 2345 x 1084 pixels for a resolution of 404 pixels per inch (DPI). The 19.5: 9 ratio would be retained. The refresh rate could reach 120Hz. To contain the energy consumption of the screen, Samsung would rely on LTPO (low-temperature polycrystalline oxide) technology, already used on Galaxy Watch and Apple Watch connected watches. It would save 5-15% energy compared to conventional LTPS screens. The LTPO is notably capable of automatically adjusting the refresh rate of the screen depending on the use made of the mobile. This is especially useful for reducing the consumption of the Always-On device functionality, which allows you to continuously display information such as time, battery level, or notifications.

For Performance, Exynos rather than Snapdragon:

Despite the controversies over the performance differences between the SoC Exynos designed by Samsung and the Snapdragon of Qualcomm in favor of the latter, the South Korean manufacturer should continue to equip its flagships with its own chips for the European versions.

There is No Snapdragon 865+ is expected for the second half of the year, so the Note 20 will have to “settle for” the Snapdragon 865 already seen on the S20 series. In Europe, the situation is vaguer. We are not yet sure if it is the Exynos 990 engraved via the 7 nm EUV process and that we found on the S20 which will equip Note 20, or if we will be entitled to an improvement with an Exynos 992 engraved in 6 nm. 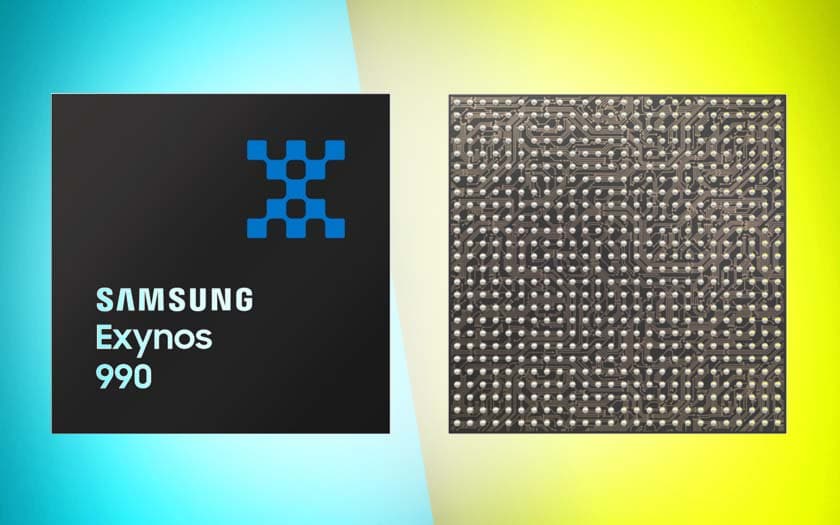 In any case, if the brand insists on making 5G phones, then it will need to find a way to integrate the 5G modems into chipsets. And, judging by the Galaxy S20, it seems the Note 20 in the US will be fully decked out for 5G as well.

For the Photo, We are Inspired by the S20 Series :

Several reports give us some information on the technical datasheet of the Galaxy Note 20+ photosensors. The first element, it will have a 108 MP module, probably the same (ISOCELL Bright HM1) that fitted the S20 Ultra.

However, the entire photo setup of the S20 Ultra should not be repeated. One thinks in particular of the autofocus of the camera’s 48 MP sensor, which has been highly criticized by users. Based on simple phase-detection technology, it did not live up to expectations. It could be replaced by a module with a Dual-Pixel autofocus system for more precision, reliability, and speed.

The standard Note 20 has fewer leaks than its big brother in the photo section. It could take over sensors from the Galaxy S20 +. 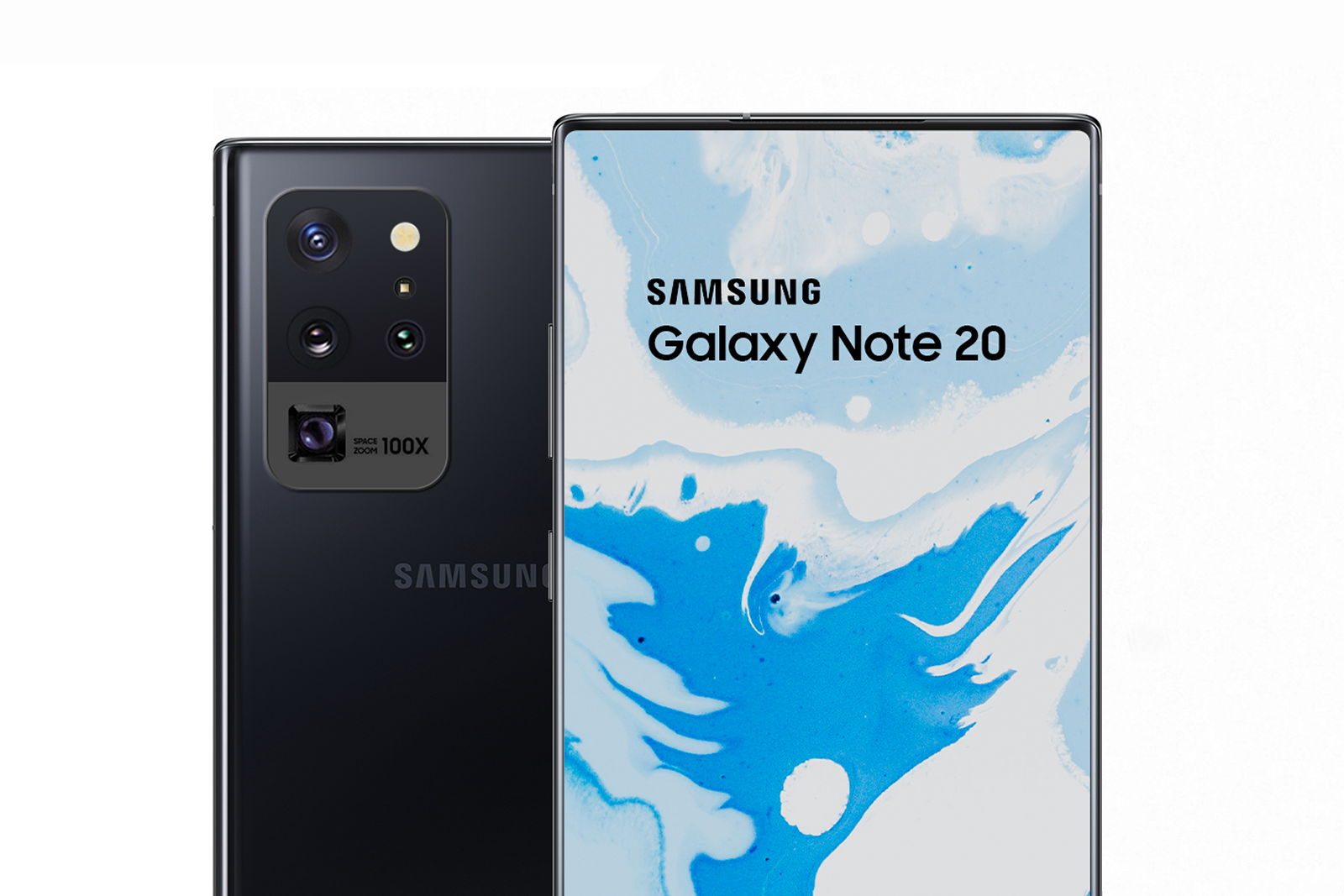 For the rest, we should find a sensor dedicated to an ultra-wide-angle, a telephoto lens, and a ToF module to measure the depth of field. Note that Samsung has abandoned its idea of offering an x100 zoom, a function that has been shown to be unconvincing on the S20 Ultra, the poor quality of the shots making them simply unusable.