It is said! 2020 will obviously be a big year for the OLED TV market. And the manufacturer Sony will undoubtedly be one of the players who will set the bar very high.

The Sony A8 is a Dolby Vision compatible 4K OLED smart TV available in two screen diagonals: 55 (KD55A8) and 65 inches (KD56A8). It has 4 built-in speakers with a total power of 30 W, Dolby Atmos compatible. Google Play, Alexa, and AirPlay are there as well as the Android operating system…

While waiting to receive very soon for testing an LG CX series, a very promising vintage OLED 2020, this KD-65A8 stands out as the best OLED that we have tested. As evidenced by its datasheet (below), this 65-inch embeds the most advanced technics from Sony, whether on audio on image quality, all led by a master’s hand: that of the X1 Ultimate processor. The Sony A8 range consists of a 55-inch model, which we tested, which is sold for 3500 dollars, and a 55-inch model sold for 2400 dollars. 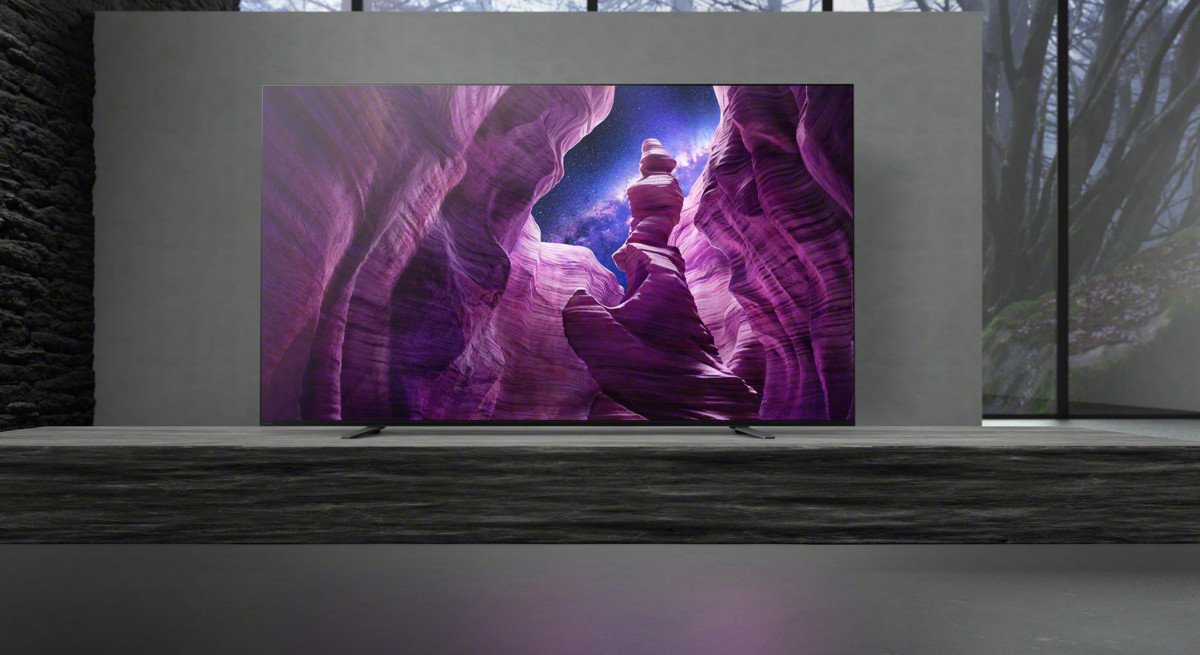 TECHNICAL SHEET FOR SONY A8

As always with Sony, design side, the keywords are “sobriety” and “aesthetics”. But make no mistake, this KD-65A8 is beautiful (in our opinion), in its own way. Like the KD-75XH95 that we tested and appreciated, Sony incorporates feet here that just clip into the chassis to put them in place. No screws to tighten, no complications … the thing is really well done! Note that these same feet position the slab almost flush with the furniture. The effect is guaranteed, but the installation of a soundbar is compromised. With the integration of the Acoustic Surface audio system, Sony considers that such equipment is no longer necessary. The most demanding will opt for a Hi-Fi system with amplifiers, satellites, and everything else. In this configuration, the audio system of the television can then act as a central voice. 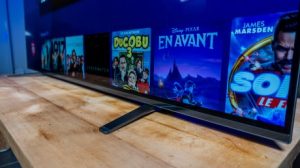 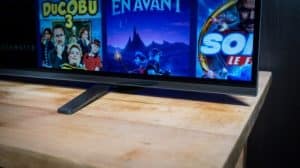 When we test an OLED TV of this caliber, we’re not hiding from you that we’re wondering if it’s still worth dwelling on what almost looks like trivialities. To say that this KD-65A8 displays an excellent image clearly gives us the impression of breaking open doors. 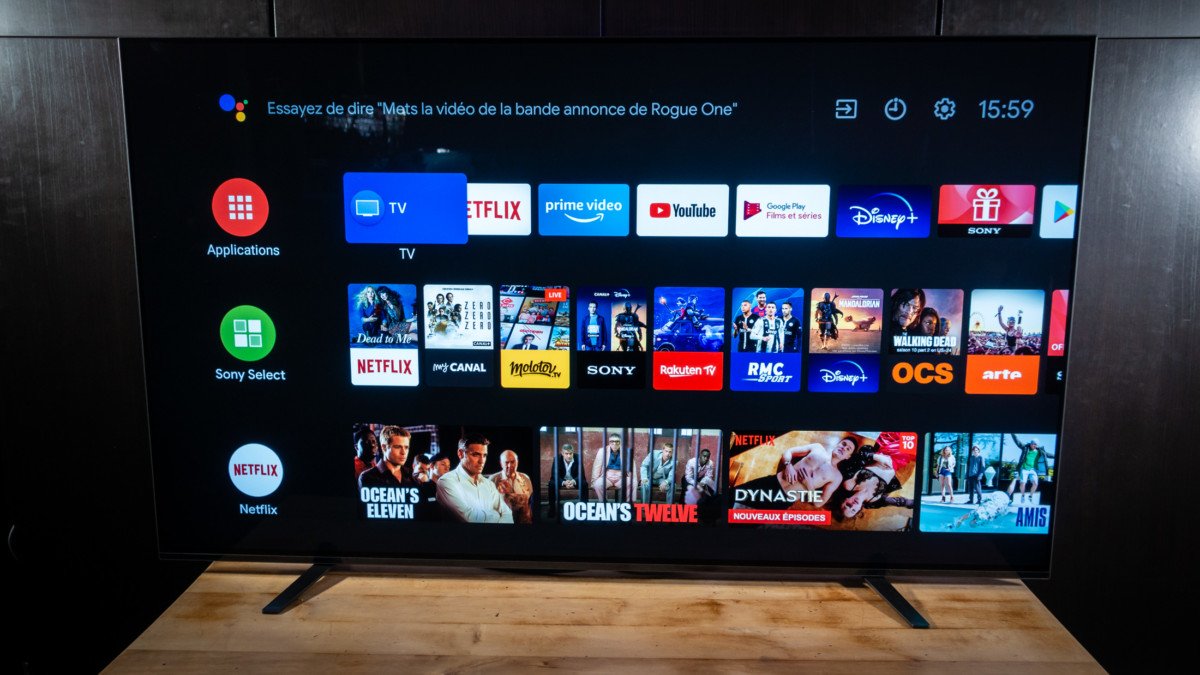 Because yes, this Sony of the A8 series is excellent and whatever the content you watch. The manufacturer does not overlook anything. The sharpness of the image? Perfect! The fluidity of the image? Perfect! Contrasts? … In your opinion? Infinite of course! Obviously, you can’t fault anything about the quality of the upscaling as well. The X1 Ultimate processor and its multiple layers/image processing technologies have proven themselves. It is natural that with this new generation of an OLED panel, everything is crazy again. And then it was already the case with the impressive Sony KD-65AG9, its predecessor. 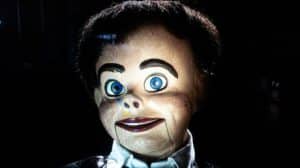 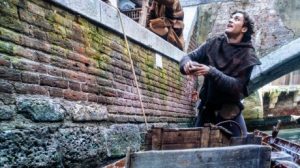 So what makes the difference? Why is this Sony currently the best OLED we’ve tested? Well, it’s the whole cinema experience, but also the user, that he brings us to life. To its image which borders on perfection is added an audio system that does not lack a trunk. 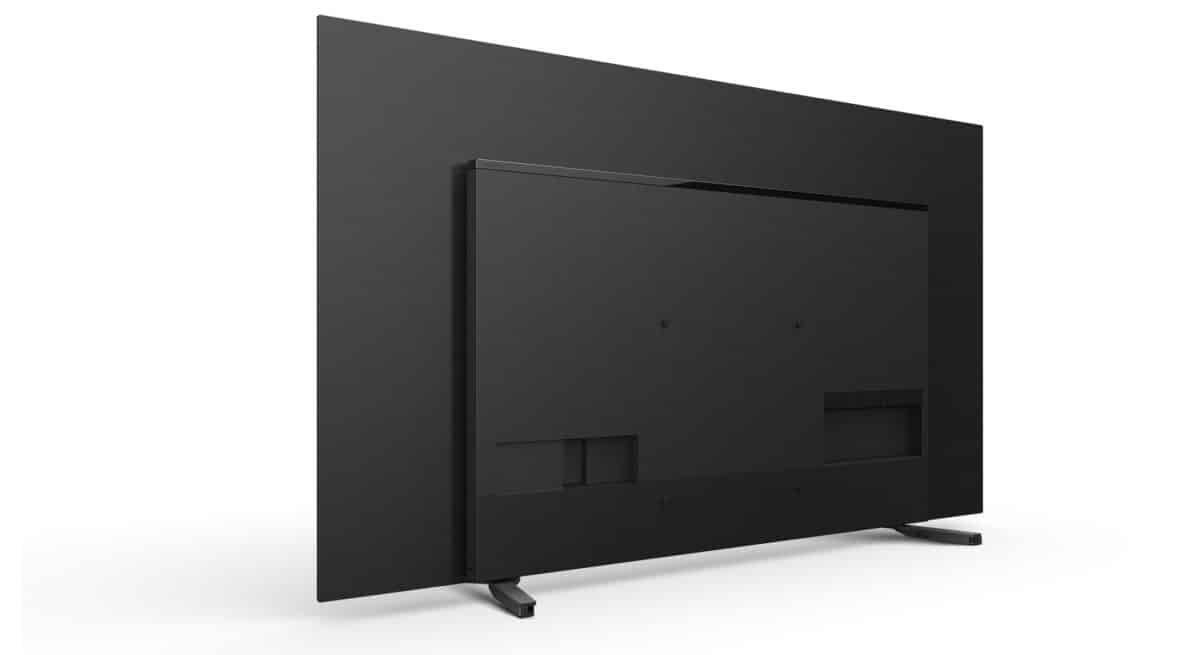 Acoustic Surface Audio, it is its name, uses two subwoofers located at the bottom of the screen as well as two “actuators” which vibrate at the back of the panel to produce sound waves, so as to produce sound directly aimed at spectators.

Sony never communicates the audio power of its system, but for our part, we have nothing to complain about. We were able to appreciate the function of highlighting the voices thanks to a specific adjustment of the equalizer: practical for certain programs. There is also the audio calibration function based on the acoustics of your room. A procedure that you can start when you install the TV or come back to it later.

This seemed to bring something to the 75-inch LCD with equivalent technology (Acoustic Multi-Audio) … maybe this is the habit or the fact that the sound of the A8 is already good at basic, but the delta of quality between the use or not of this mode seems less perceptible to us. Anyway, this is it… so much to enjoy. 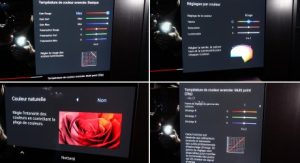 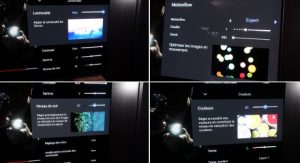 It’s also hard to find fault with the quality of HDR content. And for good reason, Sony does not ignore any of the standards: HDR10, HLG, and Dolby Vision … here everything goes. The manufacturer does not incorporate the “Film Maker” mode. For Sony, its expertise created in collaboration with the Sony Pictures teams should benefit its customers who buy a high-end television. But do not brandish your weapons: the Cinema mode or the expert mode are calibrated (both on the colorimetry and the treatment overlays) so that the artistic paste of the directors, cinematographers, etc. returned as faithfully as possible. In other words: it comes down to the same thing, except that we’re not talking about a mode designed with the Ultra HD Alliance.

Anyway, if Sony positions itself here as the guarantor of this image faithful to the intentions of cinema professionals, the options are numerous to leave the hand to the spectators who would like to tweak their settings. 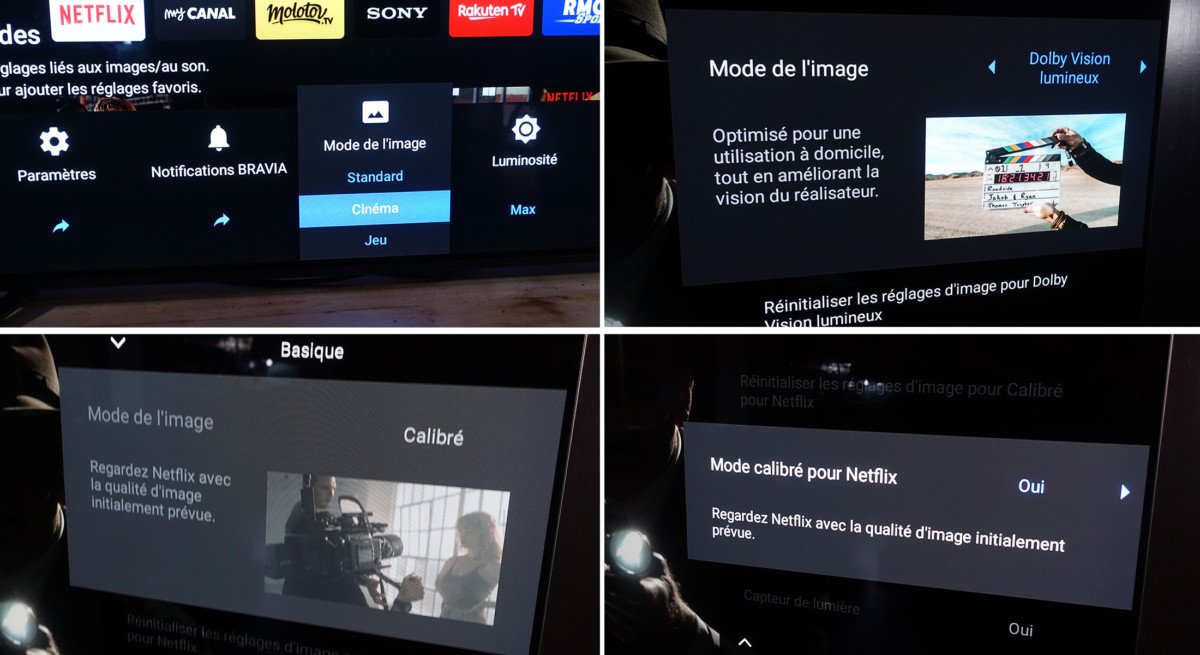 And then remember that if you are a big consumer of content on Netflix, you will appreciate the associated image configuration. Please note that “Netflix mode” must be activated in the menus, but it is quite possible to choose another one. Besides, if the content is Dolby Vision compatible, the electronics automatically switch to one of the “Dolby Vision light or dark” modes.

And to finish with this aspect of display and “image processing”, also note that this Sony TV is labeled IMAX Enhanced. Rather an interesting point for the future, because iMax content is still quite scarce for the general public – especially since it will be necessary that the whole chain, including your Hi-Fi amplifier, is compatible. In Europe, Rakuten TV has positioned itself as an OTT broadcaster of iMax content and, that is good, the application is available on this television. 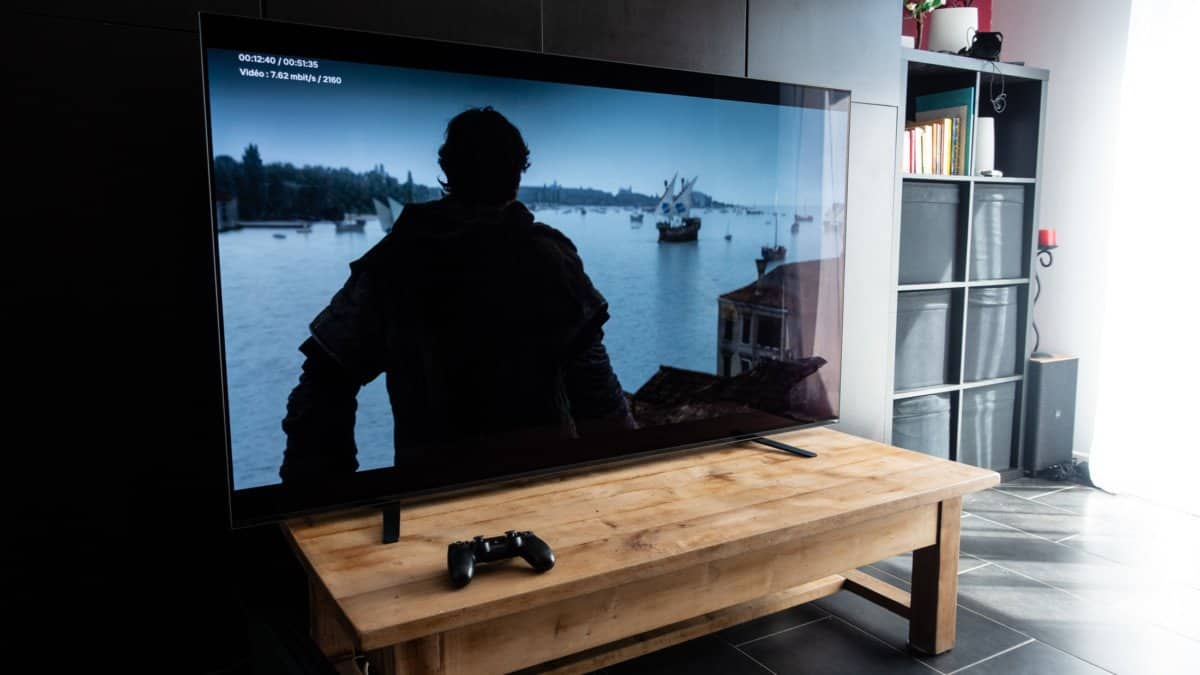 During the test of the Panasonic TX-65HZ1000, we criticized the panel for being extremely bright, like all OLED panels elsewhere. Except that some manufacturers apply a more or less effective anti-reflective treatment. And, in our opinion, this Sony KD-65A8 is a notch above that of Panasonic. However, be careful: the Sony model does not have a rotating base. In fact, our south-facing picture windows remain torture for this screen during a very sunny day (as it is here) and in our test configuration. 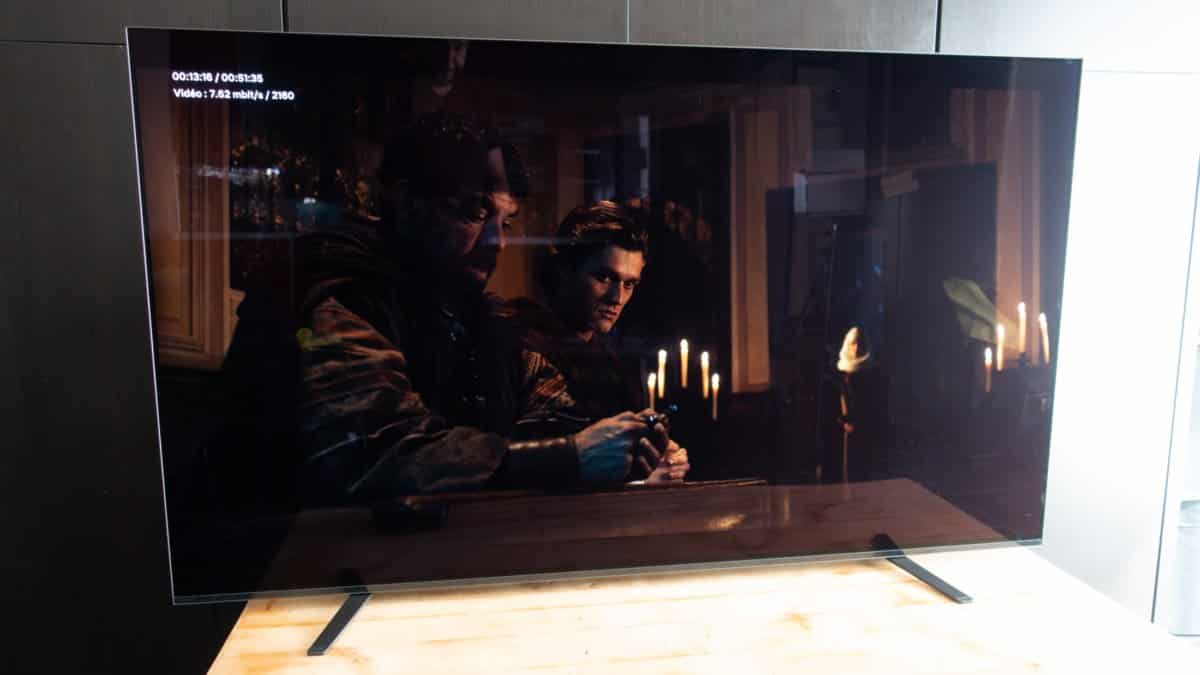 This KD-65A8, unfortunately, does not integrate HDMI 2.1 connection as can integrate the Samsung Q80T or the LG CX range – damaged a few months after the release of the PS5. Here, only eARC support is supported. However, Sony intends to work naturally to optimize the gaming experience, as we had already seen in previous tests and in particular that of the KD-75XH95. So, as soon as the television switches to game mode, the electronics deactivate certain image processing to optimize the response time of the screen as much as possible, but also the delay in display. 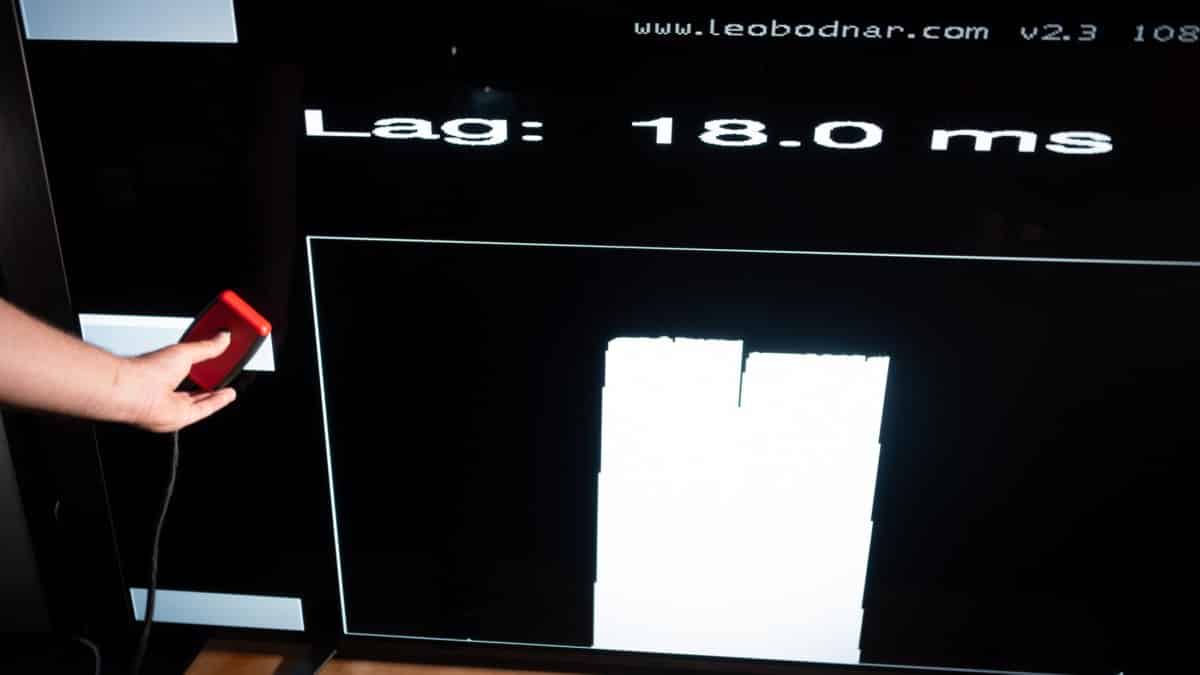 For the time being, the manufacturer is unable to follow LG in the matter, since we have measured an input lag of 18 ms whereas it’s South Korean rival should be around 10 ms. Nothing to panic about, the value remains good and this delay in the display does not show any loss or image shift. Especially as for everything else (fluidity, contrast, brightness, sound reproduction …), everything is fine with this KD-65A8. Still, we would have liked the full package, especially to compete with the models from LG that we really look forward to testing. 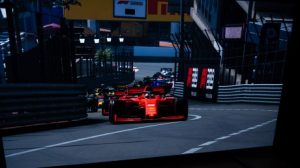 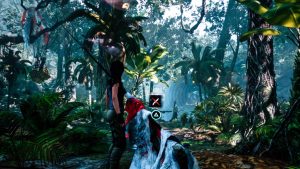 Like the Panasonic TX-65HZ1000, this Sony OLED KD-65A8 displays perfect results for our measurements. It’s impressive. As always, it’s Expert mode that turns out to be the one with the best color fidelity – much like Panasonic’s Film Maker mode. 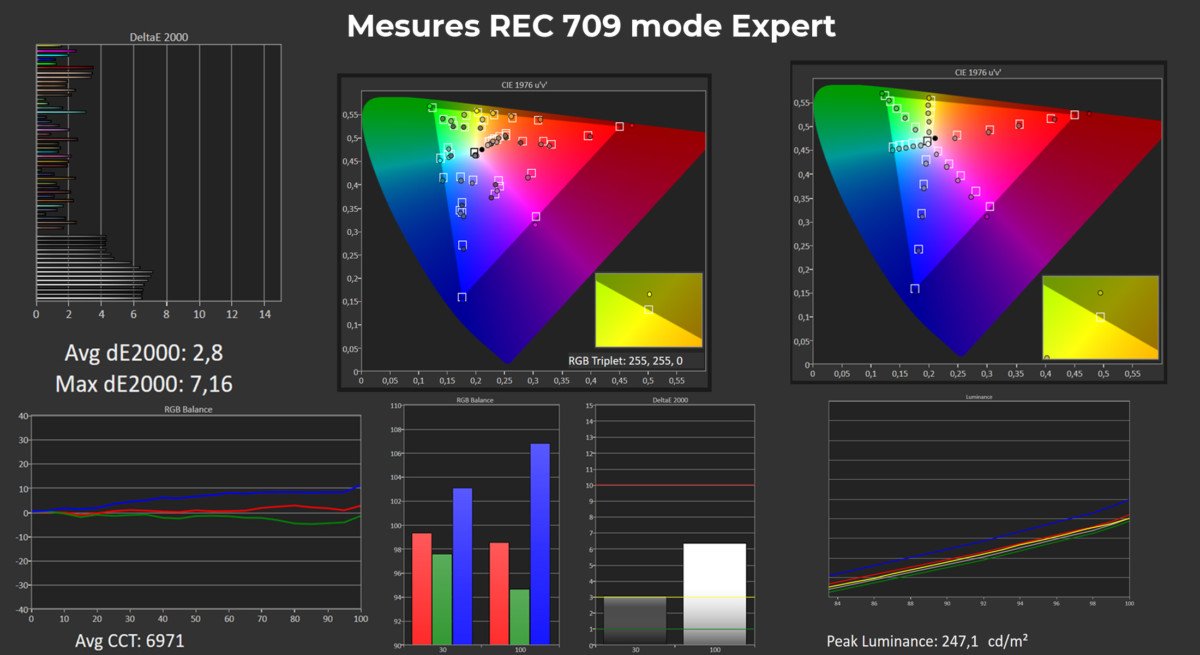 Our measurements show, however, that the color temperature is still a little too cold (6,971 K, instead of 6,500 K for reference), which is detrimental to the average Delta E with white fidelity beyond 4 This does not prevent it from displaying an excellent average with a score of 2.8 on the REC.709 color space, which is also 100% covered. 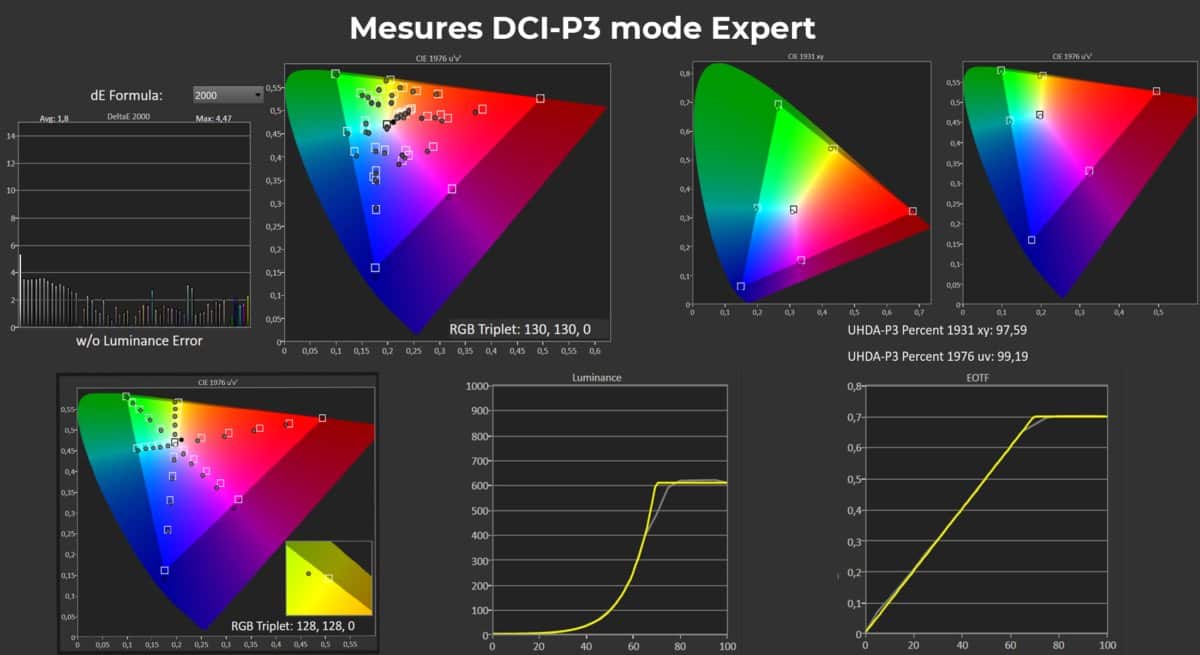 The same goes with the DCI-P3 measurement results which are simply perfect too. The work done on these OLED 2020 panels is really excellent and it will be harder and harder to separate the manufacturers from each other. Sony and Panasonic offer formidable models here. The brightness measurements also show some similarities between these two Japanese manufacturers. 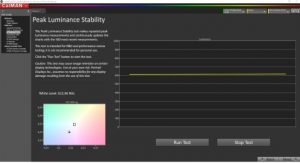 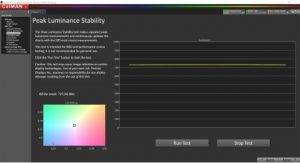 We were able to measure light peaks of 613 nits for expert mode and 727 nits for Intents mode, both with a white target occupying 10% of the screen.

TO TOP IT ALL: TOP SOFTWARE ERGONOMICS

Finally, the last point on which this Sony makes the difference: is its comfort of use. The manufacturer seems to have found the right recipe to enrich Android TV and make this operating system very pleasant. The many menus and submenus are accessible very quickly. 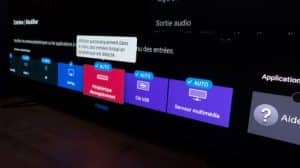 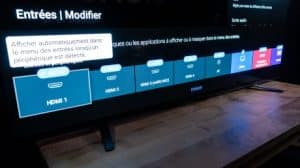 To push the settings further, just click on “Settings” again in this icon bar to access other menus, reworked again by Sony, as we saw above. The image settings are now captioned and illustrated so that the average user who would like to tweak their image a little can find their way around. A similar icon bar also applies to shortcuts to sources and some applications. The choice of HDMI input, Bluetooth, a favorite app, or even access to sharing functions via Apple AirPlay 2 … everything is there to make your life easier. A peculiarity that also attracted us to the XH95. 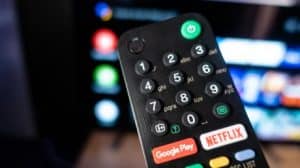 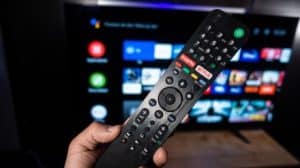 Finally, the remote control. Testing the Panasonic TX-65HZ1000 reminded us of how annoying a bad remote control can be. While we also criticized Sony for the ergonomics of its zappets which did not evolve, the manufacturer has released a leading model with the KD-75XH95, with complete remote control with a microphone and backlit keys coupled to an ambient light sensor and a motion sensor, just to avoid draining the batteries too quickly.

The one delivered with this KD-65A8 is not backlit and we regret it. But we like its black color and its brushed aluminum finish which make it quite classy elsewhere. And above all, what works well! Like the Bluetooth appetites from Samsung and LG, it is useless to point the television to control the menus. Grab the thing, click and it’s done! Besides, this remote control, like that of the AG9, is both infrared and Bluetooth compatible. This technology is used in particular to control the voice recognition functions of Google Assistant.

The succession is assured! After a high-flying AG9 range, Sony is giving birth to offspring that is a hit. The image quality is excellent, the audio part is neat, and the comfort of use, in general, is there … all that is missing in this KD-65A8 is an HDMI 2.1 socket (and a little fewer reflections) to be perfect! In any case, that’s for sure: this year 2020 promises to be tasty in terms of television and we can’t wait to test the CX range from LG which has adopted HDMI 2.1.

For less than 160 dollars, the Honor 9A offers triple camera and large battery