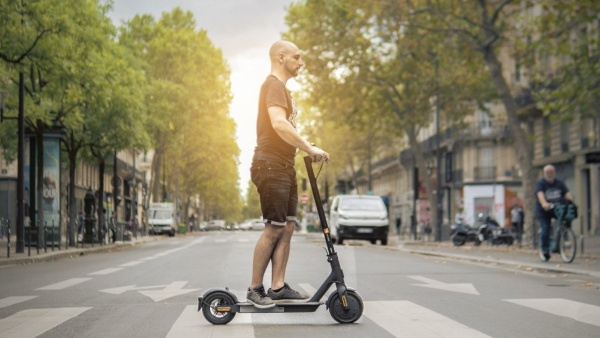 Xiaomi launched in July 2020 three new scooters. Among them, the Xiaomi Mi Scooter 1S acts as a “mid-range”, between the “Essential” model and the “Pro” model. On paper, this is a simple rebranded M365 as the technical characteristics are the same, but is it really the case? We tried it to verify.

A Design… Of Xiaomi Scooter :

If one had to describe the design of the Xiaomi Mi Electric Scooter 1S, the most obvious would be to say that it is … a Xiaomi scooter. Since the first model released in 2017, the manufacturer has only developed its models in small steps. At first glance, we therefore have before us an M365 with some subtle improvements.

By law, the Mi Scooter 1S is equipped with several reflectors, both on the front and rear wheels, but also on the front of the stem, making it easier to see in dark environments. At the rear, on the mudguard, there is also a larger light, therefore more visible, as well as a small square to possibly accommodate a small license plate if this were to become mandatory. 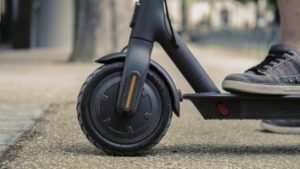 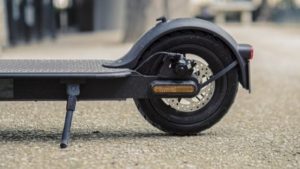 Beyond that, there is an electric scooter of the same dimensions, with a rather tight deck (14.4 cm) on which it is rather difficult to position yourself with both feet. It forces you to set your feet up, which isn’t bad, but we’ll get to that later. It’s also difficult to climb two on top of it, that’s good: it’s forbidden! 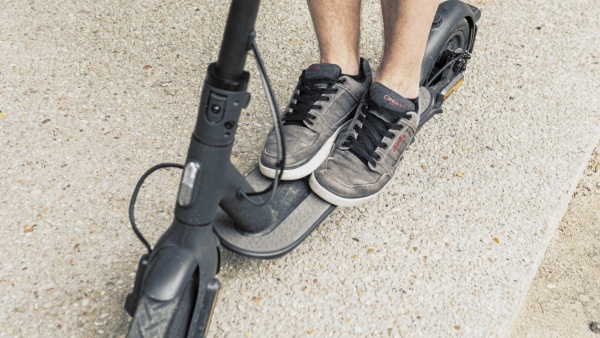 Note that with its small size when folded and its 12.5 kg, it is rather light and can be handled without too much difficulty in confined spaces. If you have an elevator to take, that’s okay, as is climbing multiple floors carrying it by the fork. Note also that this is fixed and cannot be adjusted in height. The handlebars are located 1.10 m from the ground (or 95 cm from the deck approximately), which allows use, according to Xiaomi, by drivers from 1.20 m to 2 meters. From the height of my 75 meter, I didn’t notice any inconvenience. 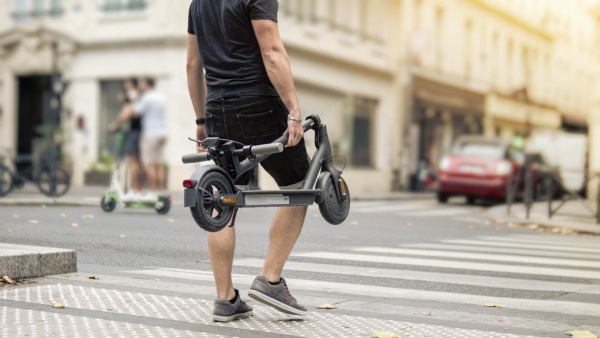 Once installed on the scooter, we find the throttle, a bell, and the rear brake. I must admit, however, that the set is quite far apart and could be better arranged so as not to have to reach for the tendonitis to ring the doorbell while keeping your hand on the brake for example. However, the handles remain comfortable, even on long journeys. 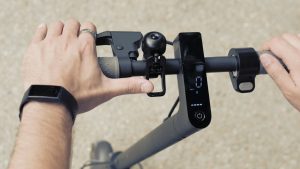 The control screen, on the other hand, shows the information available on the M365 Pro, with the speedometer, the driving mode and the battery level. These are no longer the M365 simple LED and the display remains easy to read even in direct sunlight. Everything is also controlled with a single button, which is just as convenient as it is frustrating when the light comes on when you want to change your driving mode. Note in passing that the latter has been improved and illuminates the road very well during night trips.

On the finish side, we remain on what Xiaomi has accustomed us to, namely an aluminum frame capable of supporting a maximum load of 100 kg, with visible cables. Nothing too extraordinary, but it’s pretty solid and manoeuvrable, including the folds. The latter is also very easy to understand, with a security to prevent the handlebars from playing spaghetti during the race. The Mi Scooter 1S can be folded or unfolded in just a few seconds and it can be hooked up in a snap. It is also IP54 certified, guaranteeing resistance to splashing. However, avoid intentionally driving in puddles. 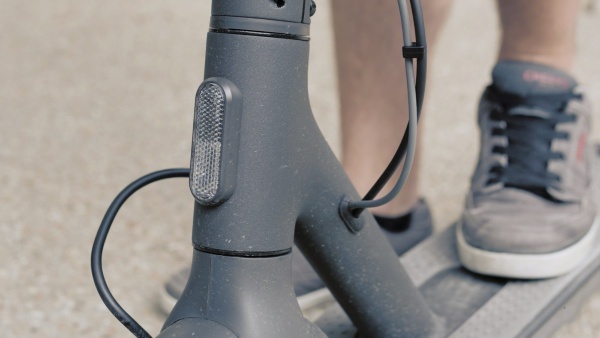 Finally, Xiaomi indicates that it has improved the quality of the tires on its scooter, a black spot from previous generations which tended to puncture regularly. They are still not solid tires, so we will have to see what happens in the long term. As on most scooters, the motor is integrated into the front wheel, which means that only the rear wheel must be secured when you want to attach a lock. A loop at the frame would have been reassuring.

A Much More Reassuring Driving :

Regarding power, the Mi Scooter 1S once again takes the characteristics of the first M365 of the name – and of the Essential model – with in particular a motor with a nominal power of 250 W and a maximum power of 500 W. In all cases, the top speed remains logically restricted to 25 km/h, but the engine power will affect acceleration and top speed on a hill.

In the idea, the driving is pleasant, you reach the maximum speed in about 5s on the flat and its small size gives it exemplary handling. But what is an advantage is also a disadvantage: this lightness makes it a little more difficult to maintain totally stable and I had to get used to it a little before removing a hand from the handlebars in all serenity to scratch my nose in full race. We got used to it, but after trying the Boosted Rev (which doesn’t play in the same category at all), it’s weird.

The most notable thing about driving compared to the M365 is the braking. As before, we find an adjustable regenerative brake (I’ll come back to this) and a powerful rear disc brake. Very powerful. It is reassuring to think that it is possible to make a real emergency stop when a pedestrian or a scooter crosses the cycle path without paying attention or a car is speeding down.

The power of this brake comes on one condition, however: the scooter throws from the rear at this time. It’s certainly better than being thrown backwards or forwards, but the first time is a bit surprising (and this although all electric scooters have more or less this flaw). This is where placing your feet square on the platform is important: by distributing your weight on the foot perpendicular to the deck when braking, you can more easily control this skidding and quickly regain control of the machine. That was the advice of the day, you’re welcome. 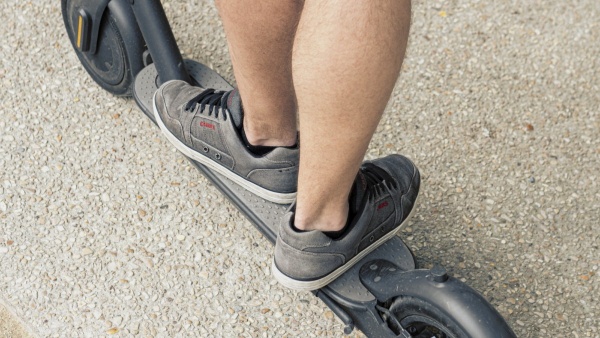 Finally, not surprisingly, the Xiaomi range does not include shock absorbers. Walking down a cobblestone street is the assurance that you will feel every vibration through your arms and into your scalp. At least that will have the merit of making you slow down.

I was very surprised to see that it is enough to give a little momentum to the scooter with the foot to give it a real momentum, which does not weaken when you keep the throttle pressed, and whatever the selected mode. Understand that with a few kicks, you can easily raise your Mi Scooter 1S to 16 km/h in Pedestrian mode and maintain this speed without even having to change mode. 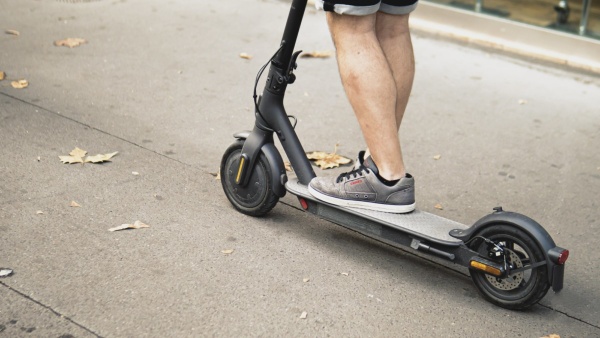 Xiaomi also promises to hold 25 km/h on hills with an incline of up to 14%. So, I rarely walk with my protractor on me to check the inclination of the slopes, but in any case you can feel the difference in power with the Mi Scooter Pro and it has happened to me several times, on small climbs. To see the speed of my electric scooter oscillate between 20 and 23 km/h at full throttle. Worse still, faced with a strong wind, I found myself limited to 18 km/h.

Like all Xiaomi devices, the Mi Electric Scooter 1S connects to a smartphone via Bluetooth using the Xiaomi Home application. This nevertheless has some major flaws. 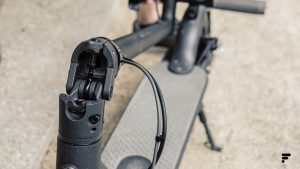 First, the first time the scooter was turned on it beeped repeatedly without indicating why locking up its speed at a few km/h. I had to pair it with my phone before I could unlock its true power. In the idea this is rather a good thing knowing that the application plays on the first launch a video reminding the elementary safety standards, but an explanation would have been appreciated.

Then, each Xiaomi product is associated with a “room” of the housing connected to Mi Home. Well, that’s not a real problem, but I admit it took a little while before I decided to assign this scooter to my “basement”.

Information is also consulted only when the two devices are paired and switched on. If you are not next to your scooter, you will therefore not be able to consult its last recorded battery level for example.

It also happens that the application sometimes has trouble finding the electric scooter in Bluetooth. This is rare and a restart of the app and the scooter is usually enough to fix the problem, but it’s worth pointing out.

A good point all the same: it is possible to lock your electric scooter from the application and to secure it with a password. Password that is not hidden on the screen when you type it …

Apart from that, the application allows to update the firmware of our faithful steed, to know its temperature or the state of its battery, to know its battery level or even the total distance covered by the car, its remaining mileage. estimated (don’t be fooled), or even “single mileage” and “average speed”…. which strangely remained at 0 for the duration of our test.

You can also activate the cruise control – which locks the speed of the Mi Scooter 1S after 5s without change-,force the tail light to come on constantly or manage the energy recovery force. Three options are available: “weak”, “medium” or “strong”. Depending on this choice, the scooter will slow down more or less strongly when releasing the accelerator, in fact returning more or less energy to the battery. Set to “low” by default, this setting has proven to work well for my use on “medium”. It’s up to you to try the option that best suits your driving style and range needs. 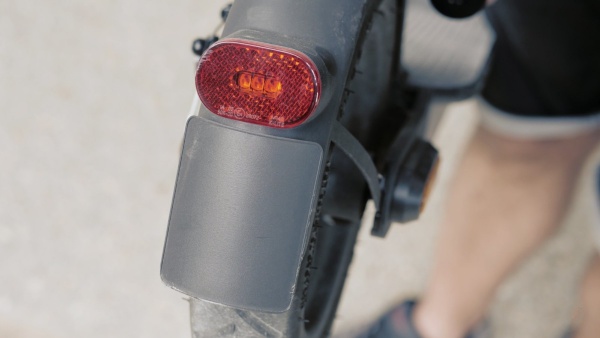 In short, between the few bugs and the imprecision of certain data, we will quickly do without the application and make do with the LCD screen on the handlebars.

With its 7650 mAh and 275 Wh battery, the Mi Electric Scooter 1S promises, according to Xiaomi, a range of 30 km. A small asterisk nevertheless specifies that this autonomy was obtained with a load of 75 kg, at 25 °C, without wind on a flat road in pedestrian mode at a constant speed of 15 km/h (which however is normally limited to 5 km/h, but we have already said that we could exceed this speed…). 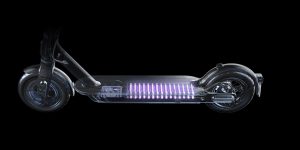 In fact, these conditions are rare. My work / home commute is 5 km and indicated as “mostly flat” according to Google Maps. In reality, I take a few detours to avoid the most dangerous places and take a few small climbs – which turn into descents on the return -, and I can do a full round trip before I run out of battery completely. Remember that I weigh 75 kg (which must be added 1 or 2 kg for the weight of my backpack) and that this test was carried out in summer, with temperatures sometimes exceeding 30 ° C. 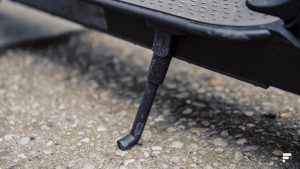 So allow 20 km of autonomy with driving mainly at 25 km / h, with a difficult end of the course. When the battery reaches its “reserve”, the Mi Scooter 1S starts to slow down little by little and my last trip usually ends at 15 km / h (even in Sport mode). Carrying your charger with you can therefore be useful on long journeys.

Where To Buy The Xiaomi Mi Electric Scooter 1S:

The Xiaomi Mi Electric Scooter 1S is available during the month of August 2020 at a price of 529 dollars. An astonishing price placement knowing that the M365 Pro is sometimes available at much lower prices.

There is no doubt that it will be regularly promoted, making it much more attractive.

LETS US KNOW WHAT DO U THINK ABOUT THIS